And you thought Charlie and Tracy were a match made in hell?! David and Tracy are a car wreck. Steve sure put his foot firmly in it, but that's typical Steve. Nothing he says when he's trying to be nice or sensitive comes out right and he always looks a right pratt. Somehow i don't think a car stereo was the "nice" that David had in mind. (I think my brain needs a shower now). Tracy is out and seems to have dropped the "poor me" act. Out drinking, shagging, making deals with demon David and sucking up to Steve. What is this, again, Tracy saying she and Steve could *still* be together if things had been different. I'll say it again. They never were other than about 5 minutes when Steve was keeping her sweet when he was trying to get custody.

I wonder if, wayyyy down deep inside, Chesney really is the apple of Cilla's eye. No wonder Chesney is having trouble at school. No wonder the whole situation has hit him so hard. The teacher only knows the half of it! And it actually upset Cilla. I think she really does care but i wouldn't say that her crying means she is a good mother, more like a guilty one. But not that guilty. Buys Chesney a movie but it's dubbed into Chinese and English subtitled back again. Cheap off the market or off the back of a lorry? It's about time the Battersbys did something about that awful moldy waterstained wallpaper! 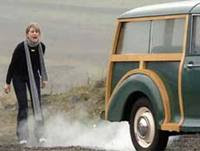 Ooh Roy and Hayley are buying a classic car, a woody! I don't think they could have found something more suited to them! Becky sure gave Jason the glad eye but as for that odious Slug, it's no wonder she doesn't seem to want anything to do with him. He thinks she's changed. I think she's finally got some kindness and respect in her life and it's helping her gain self confidence and she is trying really hard to make herself a better life. He'll only drag her down if she gets mixed up with him again. Look at what he did! Got her drunk and picked on Roy and Hayley's new car to steal. I wonder if she went with him to make sure nothing happened to it or did she just throw caution to the wind because she was drunk? Well she learned the hard way. He abandoned her out on the moors with no way to get home. What did you expect from a man named Slug anyway? It got her sacked and rightly so but Roy seemed to want to give her another chance. Hayley was really adamant. Becky kept on lurking around though, trying to apologize. Oh i hope Hayley does forgive her. I think Becky is a fabulous character.

Adam's definitely on the way out. He didn't even kiss Joanne on the lips to say goodbye but Liam isn't serious about her either. No strings, no fuss. That kind of relationship with an employee is definitely asking for trouble. Then Adam announces to Steve and Jamie that she dumped him by text. Sign of the times, that. Adam's barely been around at all. Mind you, the fewer scenes with him that i have to try to understand, the better.

Sounds like Jamie is still in touch with Frankie and why is he out of work? When did he lose his job with Penny King's outfit? Jamie is still moaning and moping around and being boring so Steve took pity on him and hired him at the cab firm. We have met Rita's old friend Doreen. Certainly got off on the wrong foot with Norris and wasn't he the one that got Rita in touch with her in the first place? Why was Doreen surprised that Norris was "with" Rita when they both came out of the Kabin? She knew to find Rita there though Rita wasn't in when she arrived to find her, and Norris was working there so I don't understand why Doreen was surprised to see them come out of the Kabin together when it closed.

Aw you gotta feel a little bit sorry for Steve with Michelle really flashing Sonny and his gifts around under Steve's nose. Who wears a diamond watch to work in a backstreet pub? Sonny is a bit too smooth, though, don't you think? "Come by and make sure you were real" He's *got* to be kidding. I tell you though. She says she doesn't care about Sonny's money but Steve is right. She's certainly bigging up Sonny's affluence. What does Sonny have that Steve doesn't? Arrogance. And a secret past from the look of it. Sean knows Sonny intimately and it clearly didn't end well! Basically, Sonny is mostly straight but liked a little walk on the wild side. Sean took the relationship far more seriously than Sonny did, so it seems. I've a feeling Michelle isn't going to be too comfortable with that part of Sonny's past. Ohmygod did you see that scene with Steve all drunk in the pub and talking to Sean about Michelle? Classic stuff. I think Sean is right. Steve just needs to wait it out.
Posted by Tvor at 10:53