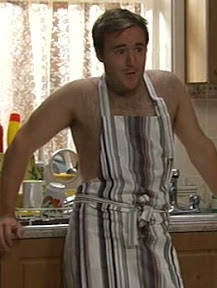 Kevin had to put up with knowing Molly and Tyrone were loving it up on a beach. Now Molly has to do the same thing but she was a lot less graceful about it, manipulating him so that he nearly missed his plane. But dear heavens, the pair of them cooing over the phone are just cringeworthy! You know, she moans that Tyrone is treating her badly but she's really being nasty to him. Aww wasn't he cute in his long apron making a big deal of her.

Methinks Luke is rapidly tiring of Rosie. Darts? I don't think so. He is going to have a darts night. But it was with Michelle! Still, we got to have some nice sister stuff with Rosie and Sophie. Rosie is heading for a fall, mark my words. Luke wants to dump her, her designs are crap and you know what they say... a fool and her money are soon parted. Watch this space.

Norris buried his brother and realized how little he knew Ramsay. It's his own fault, though. He never wanted to know and now he has to live with it. The funeral has made Rita think about finally retiring. She's said that before, and was it the drink talking? She did have a few. Poor Emily has had a hard time of it and Norris fussing and hovering and being mean about their feelings (probably to absolve his own guilty feelings) are driving her mad! Now Norris has Ramsay's personal effects in a trunk. He couldn't resist it in the end, he's too curious. Norris found out a little more about his mother, too but how did Ramsay know about Norris if the mother sent every letter back unopened? At some point she did write, probably after the very first letter and Norris realized how hurt Ramsay must have been. And Ramsay has left him money. Hmmm... Money in hand, Rita wanting to retire. I guess it's pretty obvious that Norris is going to buy out Rita. 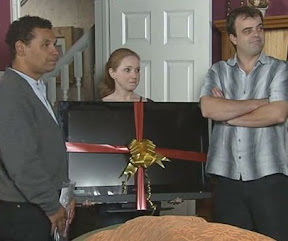 Poor Eileen got robbed by Sean's er... date. Wasn't it nice for the taxi folk to chip in and get her a new telly? Steve and Becky off on a belated honeymoon but Lloyd freaked her out suggesting it could have been a scam! Luckily it wasn't!

Hard to see Jack leave number 9. It was hard for him to leave, too. Probably for the best, he was starting to feel like a third wheel. Whether he gets together with Connie romantically or not, it's good to know he won't be lonely. aww Sophie wants Emily to sponsor her at her baptism. Just what Emily needs to cheer her up a bit. Amber's gone too. I hope we do see her now and then.

Peter is trying hard to get Leanne back and isn't above using Simon, knowing that's her soft spot. But even then, he still couldn't help himself, lying about that other woman and now he's humbling himself. I never know whether to think he's completely honest when he bares his soul or whether he knows it's just the thing she wants to hear. He certainly believes what he says, i have no doubt about that. Now Leanne needs a job and she doesn't want to work with Peter and she doesn't want to work behind the bar for only 2 weeks. While she was waffling on whether to do it or not, Liz hired Michelle. Now *that* could be awkward! I have come to dislike Michelle, really.

Fiz still hasn't told Chesney she's marrying John. She knows darn well he's not going to approve. He's giving her a hard time as it is. But Kirk spilled the beans, assuming the phone argument was about the wedding. Ooops! Not telling him and then having him find out that way only made matters worse. Nice that Julie is being friendly and supportive at least. You know, if you are this unhappy in the days before your wedding, lying to everyone and having your closest family against you, that should tell you something.