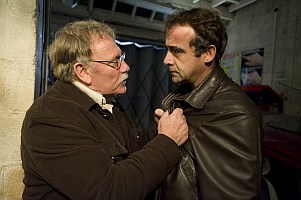 Dude! Tyrone's too sexy! Molly doesn't think so. She's brooding over Kevin dumping her while Kevin is worried sick about Sally. Molly was ready to dump Kevin but he dumped her very thoroughly so now she's panting after him again. He got the worst kind of reality check but it's snapped him out of his infatuation pretty swiftly and i'd have been extremely disappointed in him if he hadn't. It's no wonder that Kevin is upset, since his mother died of cancer but this is caught early and Sally is a major character so you know she'll be ok in the end. I can't believe Kevin told his father about Molly, though. Good lord, his dad should have taken a wrench to Kevin's backside when he heard that but he sure gave him a deserved dressing down! Excellent stuff!

Molly wasn't keen to go to the Rovers for New Year's until she heard Kevin and Sally would be there. Then she dressed up with a plunging neckline so he'd know what he was missing and she's still giving Tyrone the runaround. Our poor dim little mechanic nearly guessed she was seeing someone else but her amour Kevin convinced him she wasn't. It's just so obvious! Yet Molly is really making it all about her, flashing her cleavage at Kevin and is convinced that maybe Kevin is making the cancer up because Sally doesn't look sick. Oh just give her a few weeks when the chemo starts! Well Molly just sealed the deal on how Kevin really feels about her

Rosie wants a boob job? Oh *that's* going to go over well with her mother who might lose one or both of hers! Graeme is quite smitten with Rosie, even wearing Auntie Pam's knock off aftershave by Alvin Klein (lol!) Hey! Peter, Leanne and Simon were playing Kerplunk! I bet lots of you had that when you were kids! Natasha dumped Audrey for a hog roast! *snort* So she called the gigolo!!! Lewis certainly is a smooth operator isn't he? He knew she was nervous about hiring him and talked her through it all, telling her exactly what she needed to hear. It was a nice little scene after Audrey's date when she went to Gail's and they more or less made up over Joe.

Yeah. So Michelle gave Ryan a hard time about having sex with Sian and then turned around and skipped off to a posh hotel with a man who is almost a stranger. Nice example, eh? Not only that, Liz let her go on the busiest night of the year. That's completely unrealistic. Aw and Sophie found out she was dumped by Sian for a dvd and a teenage shag. Did anyone see Escape to Victory? It was all over the telly on Corrie on New Year's Day! I quite like those little running "jokes" and references sometimes.

Nick seems a bit keen on Tina but he's far too old for him and anyway, how much can poor David take anyway? Bad enough losing his girlfriend to his sister's ex-husband. But for her to go for his brother? So what do we think of NuNick? I think he's a far better actor if nothing else. The character was always a bit of a pratt so it remains to be seen whether he's changed any.

Steve wants a baby and Becky doesn't. Claire already knows so now Steve knows too. So what's he going to do about it? Looks like he's going to sulk. Then Becky told off Claire and Claire got into an argument with Ashley over fancying Leanne. Anyway, STeve and Becky are certainly up against a roadblock, But does Mother Nature have other ideas?

The Grandad wars continue. Ken bribing with babysitting with one hand and writing petitions with the other, right under Peter's nose in the pub too! I wonder how the view looks from that moral high ground, Ken?

Dev has decided he wants his family back. Does anyone else wish this story would go away? More and more i find Dev increasingly odious and obnoxious. I am glad to see Sunita back but i wish it were under different circumstances. But it seems the only way we can have her back is if she and Dev get back together so it's inevitable i suppose.

Are you getting tired of Michelle? I got tired of her a long time ago. Overused in ridiculous storylines. Lots of people say Becky is overused and they're tired of her, too. I love Becky and i do think that she's the "flavour" of the month but she's such a good actor and her storylines are very much in character where Michelle's were just pulled out of the air. Here's why i think Becky isn't annoying and why Michelle most definitely is
Posted by Tvor at 10:48