Good for Hayley for going to her Auntie's funeral and good for Roy for sticking up for her! The gobby relatives only showed themselves up making an obnoxious arses of themselves at a funeral. ooh, old photo of "Harold" which looks just like Julie H. and maybe some of those photos were of another boy? And what's in the letters? Something very upsetting to her, that's for sure. Hayley's beloved Auntie Monica died, why does Roy keep thinking the obnoxious couple is what's upsetting her when she's grieving her Aunt (and whatever was in that letter which he didn't know about). Poor Becky took the brunt of Hayley's grief and shock and oh. MY. GOD. Hayley had a son!!!! Hayley wanted a child so much and has missed out on the only one she had. And after she told Roy she'd never had sex before him. We all know what Roy is like being adamant about complete honesty. Still, Hayley should tell him as difficult as it would be. Instead she'd rather forget all about it but Becky isn't going to let her.

Becky's been a really good friend. Her idea of a private detective is actually a good one. Poor Hayley is quite out of her element on this one but she did it anyway. I think the Detective, as much as he probably hears a lot of strange things, probably thinks "Now i've heard everything". Hayley really does have to tell Roy, she really does as hard as it will be. Anyway Hayley's son is called Christian, not sure if that was missed on the show or edited but it's mentioned this coming week as if it was already said.


Roy really is in his own little world, when he's got his own obsessions. This crusade to do with his carbon footprint, while very admirable, is a bit OTT as typical of Roy :)

Seeing Claire all fuzzy and warm towards Ashley made me shudder knowing what was coming. Casey really ramped up the obsession, didn't she? Well it's his own fault for not having the gumption to tell her in no uncertain terms when she got it all wrong last week. She slithered back and managed to get Ashley to drive her home. A scorned woman. Very dangerous. She's gone completely round the twist and you can see it in her eye. and bloody hell, leaving the baby with Kirk??? Doh. Set it up to be so obvious what was going to happen with Madam around the corner. A bit stupid of Ashley not to tell Kirk not to let Casey was persona non grata. All Kirk knows is that Casey was friend and babysitter in the past. If i'd been Audrey, i'd have been on the phone to Ashley as soon as Casey drove away with that baby. She knew what Casey was saying was rubbish. Looks like Casey is very good at photoshop too. Clear sign of madness and obsession, having photos all over the walls that she must have stolen from Claire's photo albums, most of them, and making signals out of dropped keys.

Well now Claire knows the truth about the affair and we all know that Casey set the fire, as well. Good ending to the story, wasn't it? You knew she wouldn't jump off the balcony and having Claire and Audrey there only added to the drama. There she is out on the balcony and offering Claire a steak and a glass of wine. Completely bonkers. Claire hit the nail on the head, she knew about Casey's miscarraige and how it affected her and was able to get Freddy back from her but boy oh boy did you see the look of disgust on her face when she looked at Ashley when it was all over? Can't blame her really. She was at her wits end, feeling threatened because someone tried to kill her in the fire. Ashley doubted her and everyone seemed to her to make her feel in the wrong and then... her husband cheats on her with her supposed best friend who turns out to be the one that tried to kill her! Who wouldn't be disgusted?

As much as Frank insults Cilla, I think he's taken quite a shine to her and now he's taking her to Las Vegas! And she's off looking like Calamity Jane in her boots and hat! Doreen again made me smile. Lloyd might actually be interested in Jodie now that it seems they're bickering. That's usually a sign. Why did the police drive Ashley, Claire and the baby home? Ashley drove his vehicle to the hospital so he must have left it there. But Freddie is save and completely oblivious. What a lot he's been through in a short life so far.

Doreen and Rita are not too complimentary about poor Norris and now Emily got a bit worried when Norris proposed a nice meal and a bottle of *red* wine and she heard the girls in the salon gossiping! Poor Emily! totally at cross purposes. I thought she was going to have a stroke until she realized he only wanted her support. Instead he got her laughter which he took as ridicule but which was only her laughing at her misunderstanding him. She's twigged it was Rita but Norris got ahead of her but then it took him an hour and a half to get the nerve up. At least Rita took him seriously and let him down firmly but with grace and sensitivity.

Fiz thinks her relationship with John is too good to be true. Is that a SOPOD? Is it all going to come crashing down around her ears? Again, poor David ends up getting the short end of the stick. All he wanted to do was apologize and since Gail doesn't 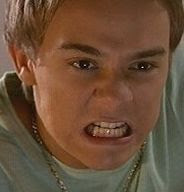 know that, she thinks the worst of him. Mind you, his method of it was a bit immature as was his means of getting back on his mother. Rage on the computer games, unplugging the fridge and tossing her package in the bin. Tsk. They're setting David up to be a mother-killer, perhaps stashing her in the old fridge in the garage? but i don't think it will actually happen.

Laughed at Lloyd and Jerry hugging each other to tease Ashley and Kirk. I finally found something about which i agree with Norris... misplaced apostrophes! Ooh Ashley mentioned Boris! How come we never see him! Dev thinks politics is a respectable profession?