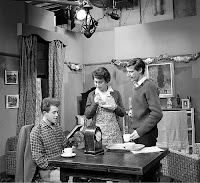 Today is the show's 48th birthday and not many tv shows can say that! There's a couple of daily soaps on American tv that have it beat but Corrie is an evening show so probably doesn't count in the same category. Bill Roache has played Ken Barlow since episode 1, continuously. There is one American actor that has played his role continuously for a few months longer and one American female actor that has played her role continuously since the mid 1950s. Both are from American soaps, Guiding Light for him, As the World Turns for her. Another woman has played her role for longer but she's not had a continuous run, and has left her show a couple of times over the years. Pretty awesome really. 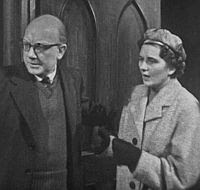 Eileen Derbyshire has played Emily Nugent Bishop for almost as long. She started on the show in January 1961 in episode 15 though her character was on the show much earlier! In that episode, Leonard Swindley came into the vestry to see Ena Sharples who had had a "spell" and he ordered Miss Nugent to see to her. This photo is a screen capture of that moment. It is distinctly not Eileen Derbyshire. It was a non-speaking part. I wrote a character study of Emily over on Corrieblog if you should wish to read it.

The show certainly has had it's ups and downs but they must be doing something right to last this long. People say it's not like it used to be but in order for it to survive, it's had to change with the times to bring in new, young viewers that will stay with the show as they grow up. We'll definitely see the 50th anniversary of Coronation Street in 2010. Will it last longer? Who knows. But 50 years in anyone's books is a damn good run!
Posted by Tvor at 07:59