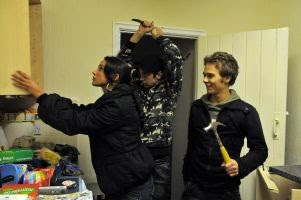 Joe's talk to David... sounded like he was talking to a 12 year old but then that's how David is acting. He treated his daughter a lot more like a grown up. Now that the secret's out, will the relationship last? Half the attraction could have been the secrecy! David had the chance to hold it over Gail when she said she'd give up Joe for him and he wisely and maturely backed down and it seems everyone has got their heads around the situation now. Now he can focus on this Windass family who don't want to pay for their new fitted kitchen. I smell the distinct whiff of a scamm there. They don't even look like they could afford a 7,000 pound kitchen do they and Joe could be close to bankrupt because of it.

David has only make things worse by threatening the Windasses who appear to be real threats, if Graeme is to be believed. So David apparently got some cash and a cheque except they signed it "Santa Claus" and David didn't eve check the cheque before he ran away. And David did make things worse because the Windasses (what's that name about anyway?) stole his tools. His uninsured tools. I'm starting to smell another loser in Gail's bed, are you? Please tell me we aren't going to have some new gobby yobbos in the show? (sorry, i'd lose my bet, guess what? We haven't seen the last of them!) Anyway, things are spiralling out of control with the three teens laying waste to the kitchen and Graeme getting to burn it in the back garden. They obviously don't have nosy neighbours. All the racket they must have made hauling the kitchen apart and then the fire and nobody called out a window even. This is getting tedious already.

Wait... David *likes* Joe and is glad to see his mother *happy*? Who are you and what have you done with David Platt! Pam is flogging men's knickers now. Somehow i just know Tyrone's going to get his in a bunch and it's all going to go pear shaped. Oh dear, it's going to go downhill from here. I'm a bit annoyed with Ashley, i really am. Last year he laid off Kirk because there was no work and promised to rehire him if things picked up. So there's a very unprofessionally hand written sign in the window advertising for help in the butcher shop. Not a word to Kirk, who's already trained, and he hires Graeme????

Steve is telling more lies to Michelle to get to solicitor appointments. Meanwhile, Jason is on a campaign to get Becky back, with flowers and everything. Probably because Sarah didn't want him but neither does Becky. Or does she? She seemed to like the flowers. I reckon nobody's ever given her flowers before but she gave them to Hayley anyway. Roy did have flowers. what happened to them?

I thought Harry was the owner of the betting shop yet Dan is acting like it's him? Dan is also trying to divest himself of Kelly and all it took was her trying to borrow a bit of spending money. Did he actually pay for her ticket? I thought she was buying her own so if she did, he better be prepared to refund it. At least he got a few bruises for dumping her so publically. He really is a pig. I've always thought so. Leanne is well out of it. looks like she and Peter might be heading for a romance. He might be a better pairing for her. 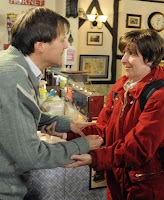 Hayley came home but missed a flight first so it was a bit of an anti-climax seeing her walk in instead of seeing a joyous reunion at the airport. (cheaper to film too!) Poor Roy was beside himself waiting for her. HE said he found out that she checked in but didn't get on board the plane. So you'd think she could have texted or called collect from the airport. Did she miss the plane on purpose or did she get lost in the airport? We don't know but now she's back, she doesn't seem to pleased to be there. She actually wants to go back!

They really need to have better security in the factory when anyone can just wander in. Tony is still juggling money though at least another one of the flats is sold. Nothing else is bound to bring Carla back like the idea that Tony's pilfering their joint accounts. And Tony may be in for another surprise. Jed Stone is still in hospital and Emily's found him. Nice little bit of history there but it's surprising that he's lived a few blocks away for 40 years and never got in touch with anyone. He's back on Coronation Street and is going to be putting Norris' nose out of joint and Tony? He isn't going to be best pleased at all! Jed is possibly a key figure to Tony's cover up coming all unraveled!

Hmmm. Dev has gone sucking up to Prem to see if he can talk him round into letting him see his daughter. How many of you were hollering "Slap him again, Prem!!!" Prem doesn't want his baby girl to know her mother is a slapper. What's she going to do when she finds out the man she loves shagged her mother? Because she will, you know, they always do. Meanwhile, Tara found out her ex boyfriend was shagging her mother!!!! I'm not surprised. I got the distinct impression that Nina would and does jump anything with trousers and I think Prem knows, too. Boy Dev sure was squirming though! And there's Nina begging Dev not to tell. Shoe's on the other foot now, isn't it? Tara's now got her stilettoes under Dev's table. Amber isn't so keen.

Dev has also bought the kebab shop to add to his empire. He got a nose at the books because Darryl was mucking things up and probably saw that it was doing better than Darryl realized. He treated Darryl pretty crap though, even allowing him to comb his hair for a business meeting on advertising that he had no intention of paying any attention to. Dev wouldn't buy a losing business. Not only that, if he's selling the business, Jerry thought he might as well rent out the house as well. What's going to happen to Darryl?