Oh Wow was the show good this week!

Hmmmm David didn't stitch up Gary when he had the chance. He's definitely up to something. Meanwhile Joe's back is still painfully painful and his temper is flaring up. He really can be a nasty w@n**r when he wants to be, when he's in pain or under pressure. I don't like that kind of temper in someone. Can anyone else see Joe getting dependent on those painkillers? He's already borrowed from loan sharks. Can drug dealers be far off?

Tara is bent on taking over Dev's life. Cheeky of her to grill Umed about when he's leaving so she's can take over the spare room. Can't she use the gallery? Theresa's back and not very sober either. Dev is backed into a corner so he allows Theresa to stay in his flat because it gets Darryl out from under his roof and away from Amber a bit too. Now Dev has to try to keep his fling with Lisa quiet but Tara is all BFF with Lisa now and Poppy is all BFF with Tara (though we've never seen them interact any more than ordering a drink across the bar) so Poppy told Tara (Surely that's against the Barmaid Code of Ethics?) and Tara is out for revenge. Overreact much? She told Dev they were finished. Yes it's a bit tacky for him to bed hop that very night but he thought he was a free agent until she walked in the next day as if butter wouldn't melt!

Tara didn't waste any time confronting Lisa but no matter what Tara said, you'd think Lisa would warn Dev that Tara knows about their fling, wouldn't you? Tara isn't that scary though i suppose if she sicced her mother on Lisa, that might put the fear into her. I think there's a lot of Tara's mother in her and i bet Dev's blood would run cold if he could hear her plot. And it's true, he did a stupid thing over buying those photos from her gallery but it wasn't *that* big a deal. Yes, he shagged her mother before he got together with her and lied about that but again, prior to them being together. And finally, Yeah, he's pretty stupid for not owning up but he's Dev. He's not my favourite character but he's fairly harmless. I really dislike Tara.

Martha and Ken may be split up but Audrey has discovered something is going on. Can Ken talk Martha back into his life? He uses every excuse but the fact remains that he was infatuated, he grew to love her but let her think he was a free agent. That's a huge trust issue. Will Ken leave Deirdre? Will Audrey tell Deirdre first? If you thought Ken was an insufferable prig before, he's even worse now. He wouldn't until he knew Martha would take him back. Will he have the bottle to do it? Leave his family just when his son needs him? Deirdre thinks Ken just has a lot of worries. Well that's true but not how she thinks. But Peter knows too (Audrey had no business telling him, though) and won't stop digging at his father. I suppose 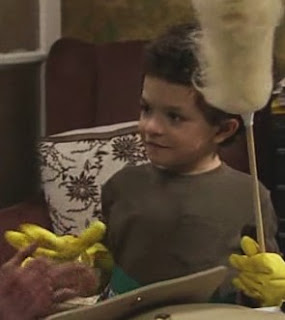 it's hypocritical of Peter to take the high road, considering he's a bigamist but i truly am enjoying Peter winding up Ken. Ken actually admitted to Ted that he wanted his cake and eat it too! Wanted more and wanted what he already had.

Norris is being an annoying little prig as usual, jealous of Colin's affections for Rita. Hmmm conumdrum. Tracy wants to see Amy but Amy doesn't know her mummy's in prison.

Still wondering why Roy and Hayley don't have their sights on Pam for stealing their business in sandwiches away. Other than a bit of huffing and puffing by Hayley, nothing seems to have been said. Could the PI be any more indiscreet with a camera and lense the size of a bulldozer? This guy makes Inspector Gadget look like James Bond! I laughed at Blanche paying Simon 50p to clean her room and he came in with the duster and rubber gloves on!

Bwahahaha!!! Blanche in the aviator hat and goggles!!!! Jack lost his birds but someone brought them back! She's Connie and it looks like Jack has a new friend, someone that likes pigeons as much as he does! Poppy is getting awfully annoyed with 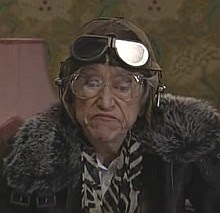 Betty lately. This can only end in tears and i'm betting they'll be Poppy's. Molly is taking to marathon training like a duck to water. Do you notice that Umed keeps dropping famous names and telling tall tales? Methinks he's making it all up!

Is Claire going to turn into a rabid footie mum? Is Tom going to stop whinging? Ok, to be fair, yes Tony is manipulating to push Tom out but all Tom's doing about it is whining and mooning over Maria. I can understand Maria wanting Tony's input on the business. Neither Tom nor Maria have any business sense at all. That was Liam's area. Tom was the website techie and perks lover. Tony totally embarassed Tom by exposing his crush on Maria and lying and saying Maria was embarassed by it. Guaranteed to push Tom even further, straight back to Luke and he spills the beans about the PI. That leads Luke to wind up Tony using the mask left over from the fateful stag night. That in turn freaks out Maria and Tony both but Luke only feels bad about Maria. Are you still with me? Meanwhile, Natasha, who's finally got a storyline, is getting the short end of the stick with Tony who's clearly using her.

Tom showed up in a rugby shirt buttoned up to the neck, which just made him look even younger and dorkier next to Tony. Also Tara and Umed can't leave our screens soon enough for me!