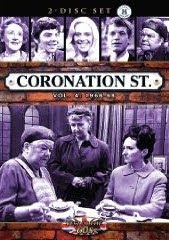 You may recall that I reviewed a volume of Classic Corrie episodes back in November. E1 Entertainment is releasing 2-dvd sets of an assortment of Classic Coronation Street episodes every few months. The episodes are taken from a series of boxed sets released in the U.K. a few years ago but are in North American dvd format. This is great news for Corrie fans on this side of the pond who want to relive the early days of our favourite show, now in it's 50th year.

Volume 4 has episodes from 1966 through 1968. And what do you get? You get aftermath of the train crashing off the viaduct. Who's missing? Jack Walker, Lucille Hewitt, Ena Sharples and Elsie Tanner. You see that Val and Ken Barlow's twins go missing, every parent's nightmare! You get a glimpse of a young Bet Lynch, blonde, leggy, and sassy and working in the raincoat factory! And cheeky Dennis Tanner finally gets married.

There's a great argy-bargy between Elsie Tanner and Annie Walker on the cobbles. There's a location shoot at Tatton Park where the women of the Street admire the gardens and stately home while the lads take a trip on a canal boat but get nowhere fast due to stubborn horses on the towpath. Even worse, the beer goes for a swim! I have to say, though, that episode is a bit dull but the one with Annie Walker at the football match more than made up for it!

Each year has a "blurb" to sum up the year prior to where the episodes start. In these few years, Ray Langton first appeared and it was also the first appearance of Bet Lynch (in the raincoat factory). Cheeky Jed Stone was in residence early on, and David and Irma Barlow owned the corner shop. Stan Ogden fell afoul of the ice cream vendor gangs and a herd of cows, and of course his wife. We've got sweet Jerry Booth and cranky Uncle Albert. Len Fairclough swaggered around, the tough builder-cum-town councillor. Irma Barlow and Elsie Tanner's hair styles get higher and puffier as the years go on.

There are no end of snobby lines from Annie Walker, including my favourite "There are limits to how far one can condescend."

These are arguably some of the best years of Coronation Street, when Stan and Hilda were at their peak, Annie Walker still had long suffereing Jack, Elsie Tanner in her red headed glory and Ena Sharples terrorizing everyone!

Where can you get the dvd? Well, online, Amazon has it (but as of this writing, they're out of stock) as does Chapters Indigo but I'm unimpressed. Chapters doesn't even have a picture and they say delivery is 1-2 weeks. I've also seen previous volumes in Walmart and Zellers and HMV as well so check those and other retailers.
Posted by Tvor at 08:01