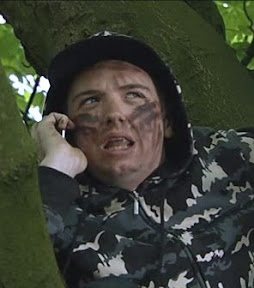 And the next funniest moment was Roy's reaction when Hayley carted back one of the life size Eddies to show him! But you know, Hayley just has too big a heart and realized Anna really didn't give Eddie the passwords. She's just got the bad luck to be married to a devious deviant. I like Anna, though. She's the only really redeeming Windass there is. Roy, of course, doesn't want to take advantage of the free trip. Morally, ethically, he probably has a small point but Hayley's a force to be reckoned with. She shall have her mini-break!

See ya, Michelle, don't let the door hit you on your skanky ass on the way out! At least she knows that Leanne isn't out of Peter's system and she knows she's not really over Steve. (So was the way to get over one guy to get under two?) This set-back has backslide written all over it for Peter. He does admit to his father how upset he is. I wouldn't have thought he'd still have a bottle of booze hidden in the flat after all this time though. Still, he smashed it instead of drinking the contents. Then he nearly had a drink in the pub until Blanche took him under her Bingo wing. They're handling this well though. Any time in the past anyone had a drink problem it was always a temporary thing. This time they're taking it seriously. Peter needs help. He knows he does but going to a meeting is a big step and it's a tough step to take. It's hard to admit you need help and even facing the group, it's still hard to really admit it. Peter better figure it out sharpish though or he'll fall and he'll fall hard.

Now, see, if Joe wasn't hauling great chunks of wood around the building site, he might not have so much pain. Yes, i know, he supposedly has no help anymore now Gary's given up. He certainly seemed able enough when he was tearing the house apart for a man in so much "physical" pain. And David, smiling smugly behind his back after catching him in mid-freakout? Little toerag!!! how on earth was he able to sit in the Emergency for 4 hours to get some painkillers when he was that frantic?

It's interesting though, seeing two addiction stories going on. Peter trying desperately to recover and Joe spiraling out of control. 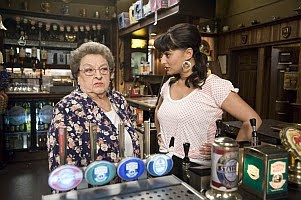 Julie is going to be Sean's life coach? Like she's got her life in order. I really don't think i'd want Julie advising me on my life. Poppy doesn't seems to be getting on with Betty and seems to be getting highly irritated with her. I'm telling you, you go up against Betty, you're going to lose. Poppy is being very heavy handed, cutting out all Betty's shifts. Them's fightin' actions and if she wants a fight, she'll have one. And what does the erstwhile owner do? Call his mummy. I don't understand where it all came from anyway. Betty always arrives before opening to get the hotpot in the oven. There's no point arriving really late because food won't be ready to serve at dinnertime.

MOlly figures if you go to a salon in town, you come out looking the same. I think Audrey has got that down to a science. Molly's really talking about looking the same as everyone else but it didn't come out that way. It's not as if Molly has a style really.

Bill is trying the singles nights at the bars. He meets a very posh sounding ma'am who is very condescending about the clientele. So what is she doing there week after week? Bill wasted no time telling lies including his name and his background. Pam cleans up nicely and she was just as bad, poshing herself up as a concert pianist.

David's putting his plan in place. He's having Gary rob Audrey's house and getting him caught in the act! Clever. The best part of this whole storyline was Graeme up a tree in stealth camoflage with code names (Mr. Savaloy and Pork Pie!) and a mobile. But oh no! Unexpected glitch? Ted had decided to house sit and was surprised by Gary. No wonder he had a heart attack! Eek! I bet David isn't feeling so smug now! He really does love and respect Ted. Gary figures Len will back him up and give him an alibi and he would have until he found out Gary really did it and could be identified.

I'm still waiting for Hayley to tear a strip off Pam for undercutting their lunch business. I can't believe she let it go this long.

Aw i think that was mean, taking the Gazette photo shoot away from Sean like that.

Why oh why cant it be David in the canal in the upcoming storyline? And he could pull Michelle in with him? I am sure in real life he is a normal guy, married with a child etc, but I would be one of those women who would see him in a grocery store and whack him with my handbag, just because...
Sad or what eh?

Aww i dunno. I'd certainly rather see Michelle in the canal but at least she's off the screen for a bit. David is at least entertaining! And yes, he's got a long time partner, a woman he's gone out with since he was a mid-teen and they have a baby!