Lines of the week:
Tony's giving Maria a spa day and then packed the baby off to Audrey. And he's still avoiding the police like a bad flu but they found him at the factory and they arrested him on suspicions!!! They did seem to be taking Roy and Hayley's accusations seriously though. They questioned him for five hours but he went off anyway. Last straw and all that. Didn't tell Maria about being questioned. Did he really think nobody would tell her? He put his spin on things, told her the truth about why Roy went to the police but saying that Roy is insane. That doesn't wash with Maria. She says she doesn't believe it but you can see she's shaken and so can Tony. 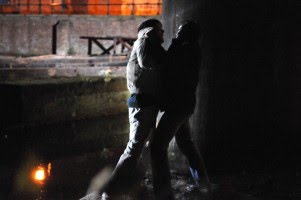 So. First. You lure Roy out into a dark, spooky location by reporting to the bat society that you've seen the rare sighting. Then. you get into the cafe and try to shut up Hayley (with a carving knife) only Maria got there instead and she believes Hayley's story. Tony knows he's lost her. Right there. He's lost her. He has nothing more to lose now. One last shred of conscience, though, and Tony pulled Roy out of the drink. Even stevens, then he turned himself in. He was so matter of fact, retelling the facts, wasn't he? So cold, so calm. The only reason he even confessed is because he knew Maria doubted him and he'd lost her. He'd lost everything and Roy's needling pushed him over the edge. When he was talking to Maria, wasn't it clear that Tony really is insane? He truly believed he could put murder behind him and make a new life with his victim's widow. 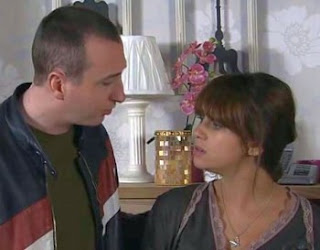 Roy managed to come out of it alive, and still had to make sure he recorded the information about the bat sighting! Poor Maria could be close to another breakdown but awww wasn't Kirk a good big brother? between the aftermath and finding her later at Liam's grave, he really does love her. You gotta feel for the poor girl (a bit more to read about this through this link). She feels stupid for being duped and it's a big thing to be duped over. Let's face it, this isn't just nearly marrying a man that's unfaithful, is it? She knows everyone is going to think she is as well. They'll be sympathetic to her face, most of them but some of them will still have something snarky to say or think. Everyone is in shock and man, you just knew Mammy Connor would have a lot of I Told You So to say! At least she didn't blurt it out to Maria first thing. She waited 5 minutes. Tony never really got her on side as much as she seemed to start to thaw. There was still down deep suspicion.

I'm a bit surprised that, as worried for Hayley's safety as he was, Roy at least didn't take Hayley's mobile. Then there was the awful acting of Ben Thompson (Ryan) who really is as wooden as a plank, isn't he? Kym Marsh (Michelle) isn't a lot better but she can express emotion a tad me realistically. Compare them to the actors playing Roy, Hayley, Becky and Tony who act circles around this lot. Apparently, this area of Manchester under those bridges is where the scenes canalside were filmed. It must have been from the other side of the bridges because it doesn't quite look right to me from this side. It's only a short walk from Granada Studios. Once you've seen this week's omni, have a read over here where i've written something on the Downfall of Tony Gordon

Back to our regularly scheduled storylines...

Brilliant stuff! Blanche managed to spill all the Barlow secrets after getting squiffy on wine when George and Eve visited. George didn't take some of the news well but he did apologize...with expensive gifts. Buying their love. I guess he doesn't know any other way. Typical Dev, riding on a guest membership long after the original person who guested him was gone and Steve's guest membership has been for a dead man. Obviously the golf club don't bother checking. Now they've got to actually pay for a membership and they are going to fight over the last open one. Dull, dull, dull.

Eileen doesn't believe that Julie fancies Jesse. I don't think she does either, for all her moaning about finding a fella. But i do think Jesse is tempted by Julie. Laughed at Jesse running down the road away from Julie. I really think that Eileen is too good for Jesse, though. He really does seem to have the apron strings firmly tied and i think he just used Eileen to try to get away from his mother. Very possibly Sean's description of Saggitarius, half donkey half man was closer to the mark than half horse. Half jackass is even closer to the mark. Why lie about your birthday? Because you want to spend it with your mommy and your girlfriend isn't invited. He used the excuse that he didn't think she wanted to go but that's really a pretty lame excuse but apparently, a pretty fair one since she had a horrible time.

John gets to be a pinnie wearing cafe guy. Seems to be a habit, having ex-teachers work in the cafe! So much for signing the van over to Rick the debt collector. He wasn't happy with it and is demanding double the remainder! Joe is back to sweating and grimacing and whinging and he's dragged Gail into it too. Just when David is halfway to possibly accepting Joe, i guess once this gets out, it'll be all daggers drawn again. And i can't blame him, really. He sees someone dragging his mother down. First it was the depression and drug addiction and now crushing debt with a loan shark and his mother about to sell his home out from under him!

You know that running joke about Spa and people talking about shopping? There's a grocery store chain in the UK called Spar.

Becky thinks Gail could wear a dress just like one of hers! Ya think? Here's what she'd look like! 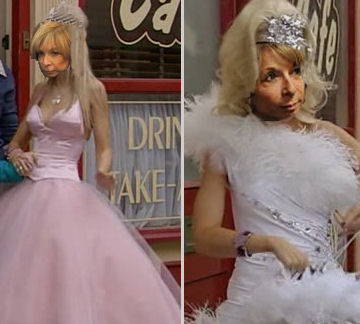 heehee...I LOVED the scene with Blanche.

In her defense, when you summarize the Barlow family history like that, it is quite sordid.

And that's without even mentioning Tracey.

Another great update, TVOR. I look forward to these every Sunday! If you're ever in London, Ontario, I'd love to buy you a pint :-)

Thanks for the lovely comments and the offer!

The Blanche scene summarizing the character of the Barlow family was one of the best bits ever on Corrie! Particularly poignant for us in Canada because we know that these are some of her last scenes.

Agree with isis - you do a great job on these updates and always enjoy reading them!

Thank you! Some weeks it the updates almost write themselves thanks to scenes like that!