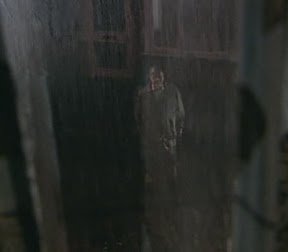 Roy poked and prodded Tony, even gazed up at him through the rain...Clearly he's getting to Tony. Tony wastes no opportunity to suck up to Hayley as well, making sure she knows he was drugged up and didn't know what he was saying. Tony's conversation with John was interesting, too. John spoke of learining to forgive himself and that he's a different man now that Fiz loves him. I wonder if Tony thinks he's a different man. He's not really, he's still up to his old tricks. He's putting scary pressure on Roy and threatening Hayley too and Hayley is scared Roy is on Tony's case too much.
So everyone got locked out of the factory because Hayley didn't turn up. They called, oh yes, but did they walk 50 yards down the road to the cafe? Why didn't someone do that? tsk. Solution? Go to the police. I wonder how seriously the police actually took them but it looks like they were going to follow up anyway. I'm sure Tony could probably charm them out of it like before but things are definitely closing in. Roy always seems to get so single minded when he gets something under his skinand with no regard for anything else until it goes too far. Next step? Run away but they don't fool Tony, nosiree, and he didn't waste any time getting his nose into the Cropper flat to nick Hayley's keys.

Gary's attitude towards War vets sure got him told very soundly, didn't it? Jesse and Julie got found out! Simon was in the crowd and wasn't he clever, getting to win all the games! It was inevitable that they got busted! and someone should tell Eileen that making a man choose is never going to end up well. It's too bad, John Thompson is a good actor but they didn't do a lot with his character.
So Joe owes 9 thousand pounds??? The loan shark bought 2 grand worth of debt with 7 grand interest! Joe might want to buy a paddle for that boat because he's up the creek! And he should have sold the boat for 5 grand. Instead he gives Rick the van and thinks they're even. Somehow, i doubt that. And will he tell Gail? Will he heckaslike! What does he do next? Buy Gail an engagement ring with the money he didn't actually get in hand from the van! 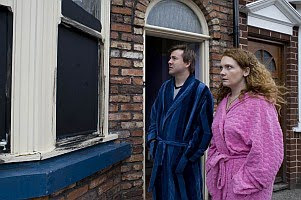 Aww Kirk and Chesney persuaded David and Zoe to paint Number 5! What stars! Even if they did paint the walls in easter egg colours! I like it! So John is going to live with Fiz... happily ever after? Not if Sally Webster has her way. I know she's got good reason to dislike John, really i do, but she did go a bit over the top. After all, Rosie isn't bothered or scared of having him close by. She never really was scared of him. Mind you, i am surprised that legally he was allowed to live within such a short distance of his victim. Wouldn't that be unusual? Couldn't Sally and Kevin have put in an order or would Rosie have to do it? It would serve Sally right if Fiz called the police but Ches is right, ignoring bullies is the best way to deal with them, especially bullies like Sally. Nice example for your children, though, isn't it? Not.

Style-ista of the week.. Eddie in the buff body pinnie! John fell into a job at the cafe. Steve and Becky are back from honeymoon and Steve's quite surprised to find Theresa with her feet under Lloyd's table. Lloyd's embarassed (wouldn't you be?) and pretended she was cleaning his flat. She'll clean his clock! Steve and Lloyd seem to be pretending to like each other's girlfriend/wife but i thought Lloyd actually did like Becky? I bet most of the photos Anna was looking at that she thought were a scowling young Roy were a scowling young Harold.

So Connie sleepwalks! Molly didn't like hearing about Kevin's past, did she? I wonder if it made her feel like just another bit on the side. Well, i think that's all she is no matter what Kevin says. Molly better get her act together. She's treating Tyrone like dirt and he's getting upset about it all. She needs to leave him or chuck Kevin for good. Kevin wasn't fooling the lawyer with his story about a friend. Now he knows it will cost him big time. That's one more reason not to leave Sally. Married men rarely do. It's rather the exception that proves the rule.
Posted by Tvor at 12:42

Came across your blog and thought I'd say hello, from another NS corrie fan! (Dartmouth)

Hi from NS! Did you know in the Halifax area the Downeast Streeters hold regular corrie "pings" (get togethers" in Dartmouth? www.downeaststreeters.ca for information

THanks I wasn't aware of this until I came to your blog.We just may mee at one!

Hope you do come to a ping. Send your name to the mailing list via that website and you'll be notified when the next one is!