Though i'm glad to see the back of Joe, i can see this storyline is going to drag on eternally. *sigh* How can you have a successful faked death if you haven't got a missing persons report or a boat floating abandoned in the lake? Someone isn't thinking this through very well. It's time to get the police involved because the threats are escalating to trying to burn the flat down! It's just not on! and then David texts Tina using Joe's phone and sends her flowers? Talk about digging an even deeper hole and it's going to come back to bite him, mark my words. In amongst all this, David is having a hissy fit because Tina is marrying Jason. That aside, David seems to be the only one talking sense, for once, pointing out that Joe can't love Gail very much if he's putting her through this. And it doesn't make sense anyway. Why fake your death to get the insurance money if you can't be declared dead for seven years! 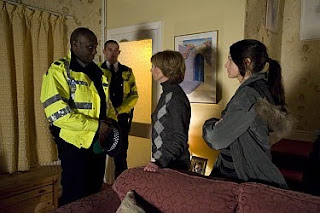 Gail protests that she wouldn't put up with a man beating her but i think she just might. She certainly puts up with everything else men throw at her, at least emotionally. I think she's inherited Ivy's blinders. And Tina...complaining because her father hasn't had a birthday present for her yet she knows he owes his soul to the loan shark. So when she does get flowers (from David pretending they're from Joe) she complains they're too expensive and they're not flowers she likes anyway. Selfish cow. She doesn't believe the "fake your death" excuse when they finally have no choice but to tell her. Her logical conclusion is that he committed suicide, considering the crushing debt and history of depression, but by the end of the week, though, Joe's body was bobbing about in the lake. He's dead, Jim! Er. do you not think it's odd that he sailed out quite a long way away from the cottage, Gail certainly couldn't see the boat from it, yet his body bobbed to the surface within a stone's throw of the cottage?


Dev is such a faker! moaning about his back and then leaping up to the bed. There's more ducking and diving and trying to fool the Aunties again this week but honestly, they can't be that stupid. Hilarity ensues. Meanwhile, as one couple inch slowly back together, another is marching apart. 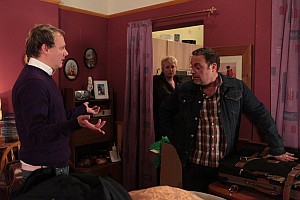 Jesse and Eileen seem to be doing the slow dance to the end, don't they? Mind you she's being inordinately rude to him lately, especially about his job. It's no wonder he's considering his parents the most important people in his life and Eileen surely can see where she stands. Why did Eileen think Jesse would pick her over his parents? Well her rudeness aside, he's been attached to them by the apron strings all along, anniversary or not. And it was pretty childish of him to be quoting divorce statistics to Tina and Jason, newly engaged. He complained, he was miserable, Eileen deserves better and i'm glad she found her self respect and chucked him out.

Becky is certainly taking advantage of the pregnancy too, ducking and diving work, and Steve must know this but is happily pandering to her.  The Auntie who's son is a dancer in Vancouver with a Norris has got a point... young people really do talk about every tedious detail of their life on their mobiles. I hear them on the bus all the time. How much tea was drank in various places on screen this week? Bucketloads! Natasha has the hots for Nick and she's not even met him yet! 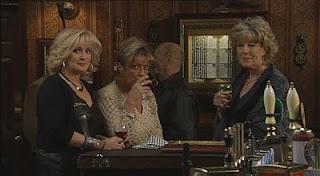 Audrey has booked the smooth and ever so slick Lewis again. She seems to be a sucker for his silver tongue. It was pretty funny seeing Liz and Deirdre and Audrey eyeing Lewis and him picking up Audrey and not Liz. Of course it was a set up but didn't it set the other two's complexions a bit greenish?


Nick seems to have his eye on Carla. I don't think she'd give a little weenie like him the time of day, frankly. He used to run the factory *for* Mike Baldwin? Mike Baldwin taught him everything he knows? Mike Baldwin sacked the little toerag, if you may recall. He wasn't much more than a toady.


If the Alahan house is a 3 bedroom house, then the twin must share a room if the Aunties are installed in the third bedroom. Roy needs to reduce the hours of his staff. Wouldn't it be better not to have them all working at the same time and
Posted by Tvor at 21:01

Hi, I wondered about that too - Joe popping up right by the cottage. I also wondered why the lights were blazing in it, a now presumably empty cottage. What I think is that he turned up by another, very similar one. Perhaps that of the neighbours that came to visit and then saw Gail & Joe fighting. Joe came to shore on the property of the Collie, but the glimpse of the Collie's woman wasn't enough to show me if it was the same woman that had met Joe & Gail. If so, she'll know who he is.

It was nice seeing you and your sweetie on Corrie Crazy. He's lovely! I really enjoyed the whole show.

Yes there were a lot of gaping holes but i suppose we aren't supposed to pick at it too closely lol Sometimes i can't help myself!

Thanks! doing the doc was fun!