That's me doing the jiggy happy dance!! What's over, you ask? The Frankie and Jamie show, that's what. I don't think i've ever been so glad to see a storyline end in all the years i've been watching Corrie! This storyline promoting the affair between Jamie and his step mother was, in my opinion, completely ill-conceived from the get go. I've mentioned before, i think if Jamie had not met Frankie until he was a teenager, then his newly discovered crush/infatuation might have been understandable but he was a child and Frankie babysat him and then mothered him for years. It just didn't wash and now Frankie realizes it too.

She said last night that she went back to Danny because she hoped she could get back the Danny of 20 years ago. (Why? He wasn't any different then! He cheated on Carol with Frankie after all. Start as you mean to go on!) She as much as admitted Jamie was like Danny, all the good bits and none of the bad but then she started to see the bad bits too. His attitude towards Violet and her pregnancy turned Frankie off for starters. He pretty much just paid lip service to saying he'd support Vi and the baby. All he would do is throw money at her and then take off for parts unknown. If he wasn't going to have any involvement in the baby's life, and didn't want any either, why bother with the cash? Anyway, that's a hot topic and not up for discussion at the moment. But Jamie really showed an uncaring and almost callous attitude. All he could focus on was Frankie and his feelings. 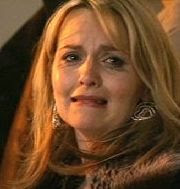 He didn't care who knew, he didn't care how or where he told people no matter what Frankie wanted. He didn't care who was upset but it. Even when they thought Danny might be dead in the morgue, he really didn't seem all that bothered for more than five minutes. He hates Danny for taking Leanne off him and this has all been to get back at Danny. Frankie was still reeling from Danny's final betrayal even though she says she's over him. She said that before she went back to Danny too, but as she also said, she was trying to "go home again" and everyone knows you can't do that. She finally realized that her relationship with Jamie is wrong and left. It also means, at least for now, that she has lost a son.

If they *had* to do it, it would have worked so much better if they'd had Jamie develop feelings and Frankie leaving to get away from him. Or even if they had to have her return the feelings, know all along it was wrong and leave to make sure nothing happened. We knew she was leaving the show (that pregnancy bump was getting pretty obvious). 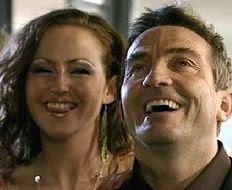 And what about Danny? Wow, Bradley Walsh had put in some powerful performances his last week and yesterday we see him with a lovely woman on his arm celebrating the new year and a new start, hopefully. I'd love to see him come back again. He and Jamie really do need to patch things up. Danny was a serial cheater all his married life and after taking his son's fiance, having his son end up with his beloved but long suffering Frankie was a bit of karma biting him in the ass. What goes around comes around and boy it came around in the worst possible way, too. As much as i feel he had it all coming to him, i still felt a little sorry for him, too. But only a little. Something tells me he hasn't really learned his fidelity lesson either. Leopards and spots and all that.

We'll probably have Jamie sloping around and whinging about Frankie. Lord knows why Sean puts up with it. Well. Ok. Sean fancies Jamie as well so i suppose that's why. He can't have what he really wants so he'll be Jamie's best friend. Too bad Jamie doesn't really appreciate it. Sean is the best kind of friend. He told Jamie and Frankie both off, told them how he felt about what they were doing but he was still there for Jamie anyway.
Posted by Tvor at 12:29

Who do you supposed tipped off Danny about Frankie leaving in the cab without Jamie? Danny called Jamie within what seemed like minutes of Frankie leaving. Paul was outside the factory and saw Frankie get into the cab. Then Danny told Jamie not to worry about the factory, and that he'd sold the flat. It would make sense for Danny to cut a deal with Paul and sell the entire factory and flat to him. And it would make sense for the producers to put a local character from the Street in the Baldwin flat, which has always been occupied by whomever owns the factory. Maybe we'll see Liam or Paul move into Mike/Danny's flat? I just can't see the producers wasting a set that has been such a big part of the story over the years.

Well Paul making that phone call seemed pretty suspicious to me. If he wasn't calling Danny, why show it? I don't know if he would necessarily have sold Paul the flat *and* the business, though it's possible. As far as the set goes, almost all of the sets are moveable walls so it's not something permanent anyway.

Too right, glad the Jamie and Frankie show are over!

You're right about Sean, I think he loves Jamie but is settling for friendship.

Me tooooo! I couldn't handle when they kissed!

As if kissing wasn't bad enough, seeing them in bed "after" was just horrendous!