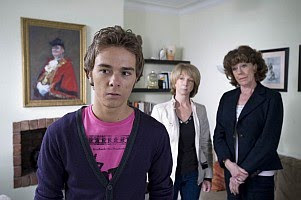 David now has to scramble to replace the photos. Plot Hole alert! Didn't Ted notice that the photos were all gone? And that lame lie about Gary hiding the photos because he felt guilty about the faces looking at him? Duh. Gary might go to prison but i really wouldn't want to be in David's shoes when he gets out. Gary whines about David setting him up but let's face it, even if that's true, and it is, Gary *still* was up for a breakin wasn't he? And David scrambling to right the photos and didn't quite make it. That's going to be his main mistake but will his family reveal it to the court? Will Gary land David in it? Oh yes he will! Will they believe him? oh yes they will! The photos were the thing that tripped up David.

Now Gail is so desperate that she wonders if Gary had himself arrested just to get at David? Oh PuhLeze! That woman is unbelievable! Then David decides to come clean and hope they think his plan to get Gary out of their hair was a good one but you know, since Ted was unfortunately in the wrong place at the wrong time, that's not gonna happen. So they all blank him. But he gets to keep his job and his place in his home. Not so bad really. They've gone through this "i'm not talking to you" before and they always weakened after awhile. Just as i figured, Ted wasn't buying into the silent treatment. But he is disappointed and that might make all the difference to David. If it was truly tough love, Audrey would let him live in the flat and make him pay rent on his paltry hair washing salary. pay your own bills, do your own cooking and laundry, sit at night by yourself. 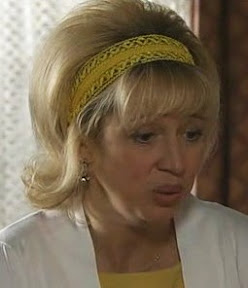 Doctor is cutting Joe off. That man is definitely addicted to those painkillers. Molly and Kevin going running. Kevin looks like a dork in that training suit. I thought they were going to be in a race awhile back? What happened with that? This seems to be a different race. Julie is getting to look more and more like a blonde Amy Winehouse on steroids. What's with the beehive? She certainly has her own personal style. I wonder where she got the idea of early 60s Vogue though? Fiz has to get to the post office? Isn't there one still in the Kabin? that's like, 20 seconds away. Or is it? Judging from the look over Rita's shoulder near the end of the omni towards the back of the shop, there's no Post office back there where there used to be though the sign is still up.

Maria had what she thought was labour pains. Did you see the dog looking up at her when she was doing the first scenes? And Tony knew nothing about the whole incident until Maria was back home the next day. But then, Tony decides to move in and sleep on the sofa and put himself at Maria's beck and call. Why, i ask myself? Still sucking up or has he grown to care for her?

Poppy finally shot herself in the foot. Not only did she upset Betty but she insulted Sean and he sacked her by proxy! Steve is so bad under pressure. So bad that he wittered so much and badly, with it, that Becky took matters and hair extensions into her own hands and that's the end of Poppy. She was a wasted character really, they never really did anything with her.

Pam nearly got herself in hot water with her lies when her dining companions wanted her to play the piano. Eek! Ms Ness knew damn well both Pam "Stella" and "Newt" were telling porkies. Looks like Pam and Bill might actually get together. Not sure i think they work together, they could be throwing them together for lack of anything else to do with them.


Oh nice. Electrical shocks and Tony can't be arsed. It's not money. Safety is important. Rosie seems to be making cow eyes at Luke all of a sudden. She really can't seem to get over that penchant for older men. I'm sure Luke must be close to Stape's age. I've got a sneaking feeling that Tony has been cooking the books to try to wipe out Luke financially. Luke had a better idea, though, make them all buy into the company. I can't see it though. There's no way they could all find the funds to make up a total of 25 grand.

Poor Sean got edited out of the newspaper photo! I didn't realize Tina was still working two jobs. I don't think Graeme is going to win any points with Natasha comparing her to a sheep he'd butchered. Tony ironing a shirt without wearing one, and making porridge with his granny's spurtle? Hmmmm... i could get used to that sight of a morning.

Fiz keeps trying to contact John and he keeps sending back her letters even though, as she says, he really doesn't want them to be apart. Me, i just wish he'd go away and we would get are sparky Fiz back again. Meanwhile, Ches just wants out. Kevin takes pity and lets him wash a few cars. I guess he figures Ches needs a bit of time for himself. And i don't see why Fiz has a problem with Ches doing work for Kevin for pocket money. She says she gives him money but he's also had a paper round for a few years so also works for his own there too. So anyway, John doesn't want to see Fiz yet allows his personal medical officer to tell Fiz, not even a family member, that he's clinically depressed and just as I"m sure was the plan of Prisoner 666, Fiz went running to the jail. I'm throwing my hands up i really am.

As much as i can't stand all this, Sally really was too petty tearing the pages out of the books. Why didn't Fiz just tell her in front of everyone that they were Roy's books and she'd have to replace them? that would have shut her up pretty quick. And whinging and squeaking at the jail guard? Have you no pride, woman?? And what on earth would John possibly want from Rosie besides an quick ogle at all that cleavage she was determined to show off?

Roy's going to send John some books and Lloyd's going to post them? Why? John won't recognize Roy's handwriting anymore than he would Lloyd's.