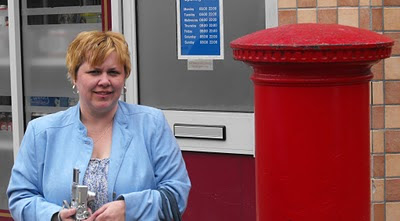 Last year, Deborah Cyr won a CBC sponsored contest as "Canada's Number 1 Coronation Street Fan" and her prize was a trip for two to Manchester and a VIP tour of the set. I published an interview that I did with her here.

During the week Deborah and her husband, Al, were there, they met lots of actors both on the day of the tour and during one or two other days that they waited at the gates of the staff parking lot including the day they arrived. What better way to kill some time before the hotel has your room ready? Deborah has done this before but not as many times as implied by several newspaper stories that were published about her during her visit.

Deborah has kindly given me a description of her visit to Manchester and allowed me to publish it here. These are her words and the photos are her copyright! For those of you who don't like spoilers, there are a couple of minor ones.

July 30th, 2009 I had a message on my answering machine I will never forget "I am calling from CBC to tell you that you have won the contest looking for Canada's # 1 Coronation Street fan." After waiting what seemed to be the longest 7 1/2 months my husband Al and I headed to Manchester. Our prize included airfare for two to Manchester, 6 nights at the Marriott hotel, spending money, a tour of the set and bragging rights as the # 1 fan. 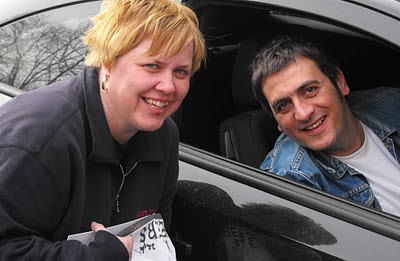 We dropped off our luggage at the hotel on March 15th and immediately went to see if we could spot any of the actors. We'd only been there 5 minutes and we saw Craig Charles (Lloyd). We knew it was going to be a good day. We ended up meeting 14 actors that day including Graeme, Mary, new character Izzy who hasn't been seen on the screen yet. The biggest surprise of the day was when we went back to check into our hotel. I was looking after that and Keith Duffy (Ciaran) walked into the hotel and asked Al if he was the man he was there to meet. He wasn't, but we still had a chance to chat with him and pose for a photo. Very nice!!

Over the week we met 26 actors....my favourite being Jack P Shepherd. I had received a letter from him years ago, plus a video message and I'd been hoping to meet him for a while. I was not disappointed. He spent quite a while chatting to us and we shared a few laughs. Of all the 60 plus actors I've met, he is my favourite. Others we met that week were Peter, Graeme, Leanne, Kirk, Steve, Eddie Windass (I did not recognize with his wool hat on until Al pointed him out) and Claire. We also saw Eccles.

Our tour date was March 18th. There were 9 of us, 3 other winners that had won a Quality Street Coronation Street contest and a chaperone from CBC. We got to see a number of sets The Rovers, Underworld, Roy's Rolls, Streetcars, Blanche's bedroom (there won't be a dry eye when we see Deirdre going through some of Blanche's things next month), Rita's flat and many other sets. We heard some fabulous stories as we went from set to set. The sets are all very small, you wonder how everyone can fit in. There are cameras, lights and wires everywhere. The highlight for me was stepping onto those famous cobbles and walking down the actual street. There is something special about walking on them. 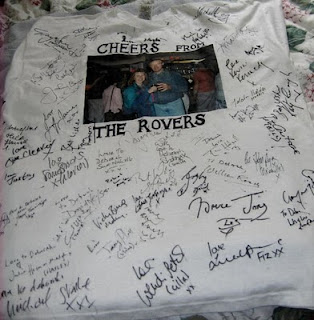 On the day of the tour I appeared in the Daily Mirror, The Sun and was mentioned on Radio 2. It was a very exaggerated story with a number of errors. I don't make the 12,000 km pilgrimage yearly, plus I go to visit relatives when I do with a day trip to Manchester, I don't camp out there either. It was still very exciting being in the paper. That day I was surprised when someone recognized me and I ended up sigining 3 autographs! Because of the article, I received a number of messages. I have done an interview with Pick Me Up magazine and will be in issue number 17. This will be 'my story' of being a Coronation Street fan.

It was an amazing week, one I will never forget. All of this for enjoying a TV show!! You can see my photos here, I took lots of photos, hopefully you will feel like you are right there on the tour with us. Grab a cup of tea and enjoy. (click on any photos to make them bigger)

Thank you so much, Deborah for sharing your story!!! I'm so pleased you had such a great trip and jealous as hell that you met so many of the actors! Memories to last a lifetime!
Posted by Tvor at 18:38