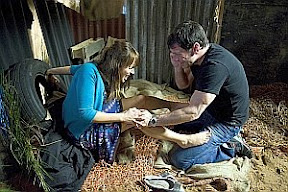 Tony's control freak came flashing through! It's ok to be worried because she was gone and not answering her phone but he did go a bit over the top. That's the Tony we know and love! I was waiting for Tony to have another panic attack, delivering the baby of the man that he murdered. He came through for Maria at least. Can you imagine giving birth in a remote beach house? Only on a soap, eh? Not only that, she had the baby while sitting on Tony's jacket and the baby landed in his tshirt! Why was there a "It's a Girl" balloon? Kirk, of course. And did you see that baby smile when Tony asked him if he was going to be good for his mummy? Tony actually shed a tear over the baby. I wonder if that was genuine guilt and remorse?

Molly and Kevin make me physically ill. Sneaking around, making puppy eyes at each other and shoving tongues down throats. Bleurgh. Did Sally really expect Kevin to be able to identify a mauve makeup bag and a fuscia lippy? Tsk. No wonder he's having an affair! (bleurgh again) And i really don't think Kevin would ever betray his best friend and partner like this, do you?

If you can't beat 'em, join 'em. Hayley ends up making a deal with Pam to share the catering profits for her sandwiches. Good deal all around i'd say. Joe's back and he's begging Graeme to get him more painkillers because the doctor won't give him any! It's official. Addiction with a capital A.

Rosie is now partner in Underworld. Tony's worst nightmare, i think! Rosie gets to do exactly the same job as before but with business cards to appease her and a cut of the profits, if there are any. She thinks she's educated. She went to a private school for a year or two but never finished her A levels so she's only got basic qualifications.

Lloyd is really missing Liz. Lots of male totty this week, shirtless Tony and then Jason in the gym. Sean spied a good looking fella and started showing off. At least those puppy eyes (the ones Sean was making at the other fella) were guilt free! But Sean, Sean, Sean, you just can't help yourself can you?

Janice is messing up with the PA job, the one Sally has always been salivating over. I wonder if Sally has to call Rosie "Miss Webster" too! Eddie has a red pullover and proposes. That must be his proposing shirt. I thought they were married but obviously not though she uses his name. Emily and Ramsay seem to be getting on like a house afire. Wouldn't it be nice if she found love? Nice to see her have a storyline anyway. And Norris isn't any more inclined to be friendly with his brother. 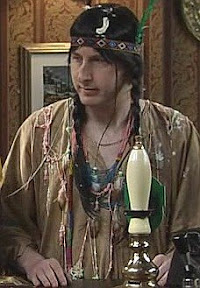 Laughed at David, Darryl and Graeme wondering why women are fawning over Jason and his new shirt. Duh. Kirk didn't have much luck as Hiya Lowa but he looked hysterically funny! Only he could have pulled that off! I like Jason and Tina together, don't you? I laughed at him telling Tina he was afraid of cows, though i'm sure he was just winding her up. I wasn't surprised it was David sending Tina those flowers and i wasn't surprised he went spare when he found out about her and Jason. Typical David. Then Jason had to sit there while David assured him with Gary out of the way, he and Tina could get back together again. *gulp*

Jesse's parents surprised Jesse and Eileen. Tit for Tat. Jason took the opportunity to tease his mother. So Jason is going to be a property developer and Tina decides to do it with him as a business? Doesn't seem like her type of thing.

On my holidays for a few weeks. See you later in May!
Posted by Tvor at 10:02