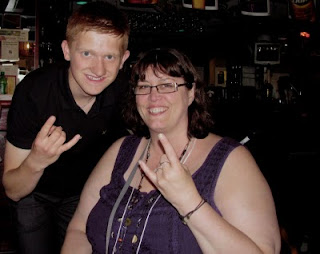 That's me and that's Sam Aston, one of the stars of Coronation Street. I attended a ping today and he was the special guest! It started a few weeks ago when the Downeast Streeters were given the opportunity to host a ping with Sam as a guest. Seems he was going to be on holiday in Nova Scotia with his parents, visiting some family friends in the area and had expressed interest in attending a ping and meeting some Canadian Corrie fans. We put it together in less than a month with extensive help from the Parkside Pub people who did all the ticket sales for us and even searched for a hotpot recipe to serve on the day! The Parkside is where we've been having our pings lately and they have been very accomodating.

The ping had to be low key since there was limited seating, unlike the huge ballroom we use for our larger events. The guests were invitation-only as a thank you to people that have faithfully registered for and attended local pings over the last couple of years. We also decided to have a silent auction in addition to our usual raffle because we had some special items that we thought would be interesting to the punters and Sam was also bringing a signed script!

Sam arrived at 1 after lunch to rousing applause. The MC, local florist and celeb Neville MacKay introduced him and ushered him on stage to see everyone. Sam then greeted everyone and got down to business. He was in charge of reading out the answers to a Battersby themed quiz that the pingers had been working on over lunch. Later he went through a stack of questions submitted by everyone. It was great to hear some of his experiences on the set of Corrie. He's been there since 2003 when he was only 10 years old and has been acting since he was 5!

He was nervous on his first few days on the set but on screen family members Jennie McAlping (Fiz) and Wendi Peters really took him under their wing. He says he still misses Wendi a lot and they do keep in touch. Now that he's 17, having grown up on the show, he's looking forward to having more adult storylines and it seems like that's going to start happening this year though he wouldn't reveal any spoilers! 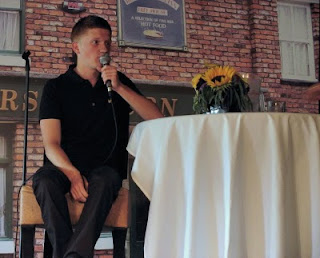 He still lives at home. He's the youngest of 9 kids, and two of his siblings have been in Corrie, too. His brother, Joe, was Tommy Duckworth for a short time and his sister, Emily, was Becky (who was the daughter of one of Des Barnes' girlfriends) back in the late 1990s. One of the best things about Corrie, he told us, was working with so many great people and doing what he enjoys. He is so lucky to be able to do so many great things, including travel. He went to South Africa a few years ago to film a spin off DVD, Out of Africa, featuring onscreen characters of Kirk, Cilla and Fiz. That was great! He said their hotel was right back in the nature reserves and was surrounded by animals coming up on the grounds all the time! He says they did film right in the animal reserves where at least once, a giraffe just strolled by behind them through the shot! He also got some golfing in while he was there and was very glad to see his on screen mum again!

He hasn't had any formal acting training but has attended a weekly workshop. He enjoys golf and football and he loves movies. His favourite actor is Denzel Washington and also mentioned Tom Hanks as a favourite. He also likes American shows Two and a Half Men and Family Guy.

He's been seeing a bit of Nova Scotia while here, too, including Peggy's Cove, Mahone Bay, Halifax, the Annapolis Valley and Port Royal and Fort Anne at Annapolis Royal. He mentioned that he'd told fellow costar, Andy Whyment (Kirk) that he was coming to Canada and Andy thought he might get mobbed here! However, he says, people have been really nice and not many seem to have recognized him at all! We pointed out that we Nova Scotians are polite and probably just left him alone! He also seems to have taken a shine to Tim Horton's donuts but we all urged him to try our local junk food, donairs!

Talking about Corrie, now, he said that actors such as David Neilson (Roy Cropper), Wendi Peters (Cilla) are very much not like their on screen characters and though Andy Whyment is a bit more similar he's not as dopey! He also said that Malcom Hebden (Norris Cole) pretends he hates Sam but he loves him, really! :) And his closest friends on the set include Andy Whyment, Ben Thompson (Ryan Connor, with whom he attended the acting workshop), Brooke Vincent (Sophie Webster) and Sascha Parkinson (Sian Powers, who is Sophie's best mate). Sam also related that he used to be quite cheeky on set when he was young and even used to prompt Barbara Knox (Rita) when she'd forget a line! 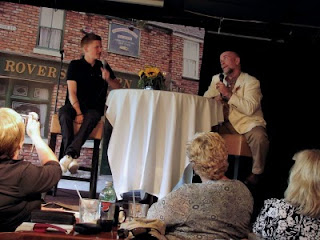 He supports Burnley for football though would probably go for Manchester City if he had to pick between City and Manchester United and he reckons Chelsea might win the Premiership this year, which prompted a major fan in the audience to cheer loudly! He supports the RSPCA and a hospice that is local to him that does a lot of good works.

When asked how he managed to decide on Nova Scotia, he related that his mother and brother met a couple on a train. They got on well, and kept in touch. His brother has been here to visit them and they've been to England and now it's Sam's turn! All down to a chance meeting on a train!

He's learning to drive, has finished school so has a bit more free time. He's saving for a house maybe, and has started a business venture with his brother. He loves bacon butties (but instructed us to always keep your HP sauce in the cupboard, not the fridge!) and he'd like to have a storyline with Jack P. Shepherd (David Platt) some time!

He's a lovely young man and was very personable and relaxed. He hasn't done too many of these types of appearances but you'd never know it, to see him joking with Neville and telling stories on stage. After the Q&A, he had a break and listened to a lady who did a presentation on the Battersby-Brown family history on Corrie. He then took the time to go around to every table and pose for pics and sign autographs. He seemed to really enjoy himself and we really enjoyed meeting him!

Hi Diane/Tvor: Thank you! I like your blog very much and check it almost every day. Thank you for sharing your ping event and pictures with/of Sam Aston. Much appreciated. Your write-up made me feel that I was there with you all. Kudos to Sam - sounds like such a nice young man and I have always loved his character - Cheseny. Thanks AuntMGC - Mary from Oakville, Ontario.

Thank you for the kind comments Mary! Glad you enjoyed reading about Sam!