Lines of the week:
Seems that Tony's going to live. This leaves Roy in a dilemma. Was Tony's "confession" real or drug induced? Tony tries to shrug it off but Roy just can't let go of the fact that Tony thought he was dying and seemed to want to get it off his chest, therefore it must be true. Well we know it is of course. Tony trying to buy Roy off by offering him a charity donation and theatre tickets "in thanks" is highly suspcious. That's only going to add to Roy's unease, no matter how much Tony tries to pretend his confession was down to the drugs or guilt over Liam's stag night etc. Hayles and Roy have deduced that Tony could have paid someone to knock Liam down, however. Roy, who cannot tell a lie and has a strong moral conscience is now going to haunt Tony, poking him and prodding him to confess on his own. This can't end well.
I think Roy is going to be Tony's Telltale Heart. Roy knows Tony spoke the truth and Tony knows that Roy knows. Hayley castigated Roy for mithering Tony when he's probably all wrong. (oh yeah?) Roy promises to drop the subject and but doesn't really believe he's wrong. He's just not 100% sure he's right. But the more Tony protests, the more Roy is confident, and he's poking a bear with a stick, prodding at Tony's conscience, urging her to confess.

Norris has yet another assistant, Horace who's the mirror image but when this is pointed out by Simon, Norris and Horace both were highly insulted! And I laughed and laughed when Graeme had Norris go to the store and ask for a crack 'ho' ;))) Graeme and Freda are also getting on like houses on fire which also puts Norris' nose out of joint. Graeme was a real joy to watch this week!

So Lucy's father is on the scene and Simon has another grandfather. Seems he was not such a great dad and lost touch with Lucy. So much so that he only just found out he even had a grandson! That isn't really going to be such a good recommendation, is it? Peter certainly isn't too keen on the idea either. I can understand Peter's reluctance and anger to cozy up to George. Peter's not had a great track record and is probably afraid George could take Simon from him. I think Leanne was right, it's going to be a war of the Grandads between Bolshy Ken who's got the morals and Capitalist George who's got money to throw around (Peter still needs backing for that bar. Go figure.)

Then it's Meet the Other Parents at the Barlows. Blanche was awesome, pretending Deirdre was the hired help and then getting looped on wine and letting all the family skeletons out of the closet. Ken's free yoyo was a distant memory when Simon saw the hand held computer game from George. 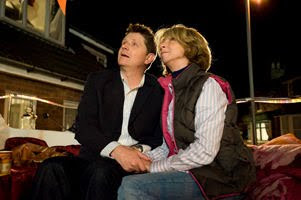 How can Joe's boat be finished when he thought it would take him a year of working on it when he could get the money for stuff? Now he's ready to put it in the water? Understandably, Gail is not really keen on actually sailing, not after Hillman tried to drown them all. I'm kind of surprised David would consider it, too. He's got even more reason to be freaked out about water. Zoe seems nice and she seems to have mellowed David. I bet he's not really over Tina, though. Joe's also lost his job, he should be selling that boat for the several thousand he promised Gail but he seems awfully happy for someone who has no job and owes money. Snork... he called the boat Gail Force!!! Leave it to Gail to want hot soup when there's champagne on offer!

Seems Jack thinks Connie's trying to get into bed with him. We all know what he was like when Vera was randy! Of course Molly doesn't mind Kirk moving in with them, it's a buffer between her and Tyrone. Gail has agreed to marry Joe. Sounds like she's lining up another loser to latch onto. Jake is there and then he's gone. Was there a point to him other than showing up Michelle as a slapper and making Dev look an idiot?
John's coming home tomorrow (Monday)...I think there's going to be another round of fireworks! oh dear, and Joe has a new loan shark! 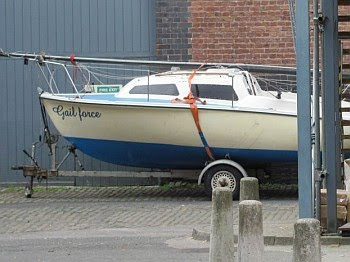