Becky's pregnant and Steve is over the moon but Becky's not. Now she's going to have Claire on her case as well but Claire was supportive. Sounds more like Becky does want the baby but is scared to death she will be a crap mother due to her upbringing and she knows she can go off on a mad rampage herself at the drop of a hat. She doesn't always take pressure well. Thing is, she really is a good mother already but feels because Amy isn't hers, it's different. IT's not, you know. It's harder to be a step mother. Steve couldn't help but tell his mother but it's only fair, Becky told Claire (who probably told Ashley!) and Roy and Hayley and Steve told Betty and the news is most definitely getting around! That baby book she got off Claire sure took her aback! 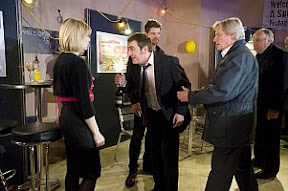 Ciaran's back! Peter was reluctant to admit to his old drinking buddy that he's off the sauce. But it didn't take being around his mate for 5 minutes and Peter was diving into the bottle again, on the sly. Ciaran proceded to pour on the Blarney to Michelle but, having Irish roots herself, she seems immune. He tried it on with Carla too, but after she told him about her murdering husband, he backed off. Especially when it was confirmed as true! I'm actually glad Peter is off the wagon again, only because most of the time in soaps, an alcoholic gets help, gets sober and it's never really an issue ever again. This slipping is more realistic i think. As much as Peter doesn't think he would ever drink again because of what happened to Simon, alcoholics sometimes still think they can handle just one drink.

Well, they can't and neither can Peter and he ended up ruining the bar party and that's Leanne's dream gone up in a boozy cloud of smoke. And to make matters worse, Ken witnessed it, too, making his view from the high horse even higher. (I'm sure it must be against regulations to have a party in a construction site!) It's too bad, he finally started to think that his attitude was only adding pressure to Peter and it probably was.


Lots of awkward with Tyrone and Molly both visiting Sally. Does nobody work these days? Why would either of them stay if they've come to see Sally and she's lying down? For someone that doesn't want Molly anywhere near, Kevin sure goes around Molly a lot. Janice is looking for a lodger and look who it is! Trevor the binman! It didn't take her long to fancy him, and why not! He's gorgeous! Why is Mary upset that the yogurt is "live"? She knows loads about all kinds of things, why wouldn't she know that it comes in all sorts? Deirdre is always so funny when she's drunk! 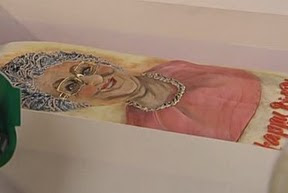 Happy Birthday Betty! 90 and still working! But is she really the oldest barmaid in Weatherfield? What were the odds that there was actually another one over 90 still working? Pretty slim, it seems to me. Anyway, she might have been a little older than Betty but probably just jealous that her boss never thought of putting her in the paper! And she stuck around at the party. I bet she wouldn't have that many locals at the Parson's Arms that would club together for a party for her!

Why did Tina tell Joe she could put her flat on the market and give the money to Joe? She just finished telling him she had a buyer for it so isn't it already on the market? Mind you, i think the loan shark is the one she thinks is the buyer. Joe's conversation with his daughter seemed to have a bit of finality to it. Was he really saying goodbye? What sort of plan does he have up his sleeve and will it have something to do with that insurance policy? 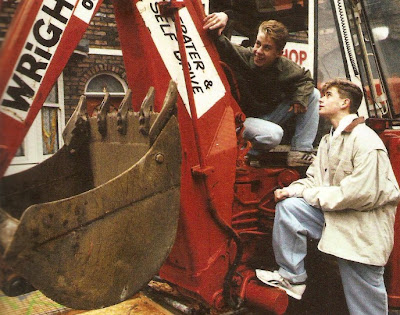 **If you will recall, when Steve and Andy first moved into the Street, they jumped on a JCB (earth mover on the construction site for the new side of the street) and drove the blade/bucket of it through Alf Roberts' shop window!
Posted by Tvor at 09:08