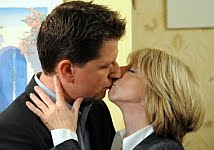 Oh i HATE hearing women say they can't live without a man! Gail always picked losers and it's not changed any. Now they have a honeymoon on the lake and are planning to bring the boat there. Uh oh Joe's looking up life insurance stuff online. And it's so frigging obvious, isn't it? Gail practicing her signature and decides they don't need life insurance so Joe is going to forge her signature! Someone does need to explain the concept of life insurance to Gail, however. She's been a widow often enough, you'd think she'd have figured it out by now. Gail, love, your husbands die! It's only prudent! I think Nick is flirting with Tina to wind up David more than anything else. He also seems to enjoy seeing Tina squirm but i don't really think he's really after her. So far he's actually a bit of a dislikeable pratt but Nick Tilsley always was. The new actor, Ben Price, seems pretty good though. And Ew, first he says his mother looks so good he'd marry her himself and now this week, he's all over David! Yeah, yeah, he was kidding both times... wasn't he? 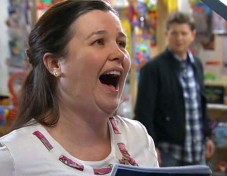 Freda is gone and Mary's back! Yay! I love her! She's absolutely bonkers! But why was she being so coy and hiding around corners? and How many moon-faced munchkins in large motorhomes does Norris know? You'd think he would have recognized her but he didn't seem to. Laughed at Norris being afraid to enter the campervan for fear of never coming out alive! Mary certainly seemed to have a few adventures. If Norris doesn't want anything to do with Mary romantically, why did he seem a bit jealous when she told him about that Spanish fella. I don't understand why Mary would have been surprised it was cold in Scotland. It's January in the show's timeline! I guess that trip of hers over half the world or whatever it was didn't make her very worldly.

Happy Anniversary! So much for Molly's promise to be a better wife. She dumped Tyrone within hours and poor Ty! It kind of cements Molly as the villain. Breaking Tyrone's heart is like kicking a puppy! Tyrone, loyal lad that he is, turned down that job to support Kevin. What does Molly do? Throw a strop and plan to walk out. Ken doesn't learn a blessed thing, does he? But he's got George having doubts. Too bad Ken never did learn to support his son. Peter is protesting how he'll absolutely not touch a drop. Soap law and the Soap Opera Phrase of Doom tells us otherwise. That's not a spoiler, that's just the way things always work! 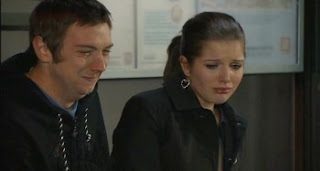 Graeme says he can get back up on a ladder next week. But his wrist isn't bandaged anymore and he seems to be walking just fine. He was kind to Rosie though salivating at her bus stop poster for drain cleaner! HA! So much for glamour shots! He's got it bad for her, though even though he knows it's so wrong!  And the truth about Rosie wanting a boob job came out. Poor Sally! Rosie or should i say Helen Flanagan acted the fakest crying i've ever seen! But i did laugh at Graeme crying in sympathy. Anyway, the gurls are starting to notice something's up. Well, Sophie did anyway and their suspicions that there's marital problems pushed Sally and Kevin to tell them the truth about Sally's illness sooner than they thought they would. That has to have been a very hard scene for a lot of people to watch and didn't they all do a good job of it!

I'm sure it must seem unfair to the workers that Sally gets unexplained time off and Kelly kicked off the worst. And you gotta love her, even after she found out about Sally, she was unrepentent. She doesn't think she should pretend to like Sally now she's ill. Kelly is what she is and what you see is what you get and she's no hypocrite. But it wasn't about the girls liking Sally all the time, it was sympathy and support. It could have been any one of them and they know it, most of them.

HiyaLowa got a big Hiya on his horse didn't he? What a Diva! Dev's flat is most definitely not kiddie proof and that really wasn't a lot of ruckus and noise for 20 kids was it? Hmmm looks like there might be a few cracks in Sunita and Matt's relationship. Maybe Matt isn't as confident about Dev being around so much? And isn't that the doctor from the Rosamund Street clinic? She came quite a long way to see Asha! 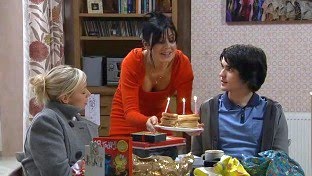 Happy Birthday Ryan. And was there any mention of her bio son Alex with the same birthday? Was there 'eck. Sophie and Sian made up at least. Seriously, Michelle. a toast cake? Don't knock yourself out or anything!

Why is it that sometimes, normal speaking between people in the pub or cafe can be heard in the whole establishment and other times, someone 4 feet away can't hear a blessed thing? Hmm, Hayley's going to take dance classes? Our unfortunately uncoordinated Hayles? oh well, i imagine she'll have fun at least.  Oh God. Eddie in his dirty dressing gown, bare legs and grotty socks!!! And oh my, can you believe Eddie made Gary a cake shaped like a hand grenade? LOL! Good thing it was tasty! Gary's off to become a soldier. It's a bit surprising to have a going away party for Gary when nobody in the neighbourhood likes him and he's got no mates except for Chesney! David stuck a target on his back. It sure backfired on him though and so it should!
Posted by Tvor at 09:07

Hi again, I liked your week's summary. I interpreted Mary's lurking around the corner more as her stalking Norris and/or spying. I do like her, but she gives me the creeps! Norris too, by the sounds of things. Gayle isn't the only person at risk right now, I think.

I'm now doing a little write-up on my choice for CS "scene of the week". Between you and Corrie Canuck, keeping up to date on a weekly basis is covered. So I'm just picking my favourite scene. It's at dorothystewart.net and has a link to your blog.

Oh Dorothy i do like your scenes of the week!