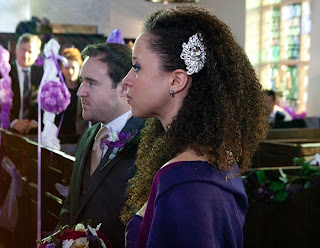 (This post was originally posted by KathrynS on the Coronation Street Blog January 2013, reposted to this blog with permission.)

Slight Spoilers ahead, nothing too dramatic...

The makers of Coronation Street held a press event on Tuesday afternoon in London to launch Kirsty and Tyrone's  eventful wedding day and other future storylines.

A representative of the Coronation Street Blog (me, reviewer KathrynS) was lucky enough to be there.

Actors Alan Halsall (Tyrone), Kirsty (Natalie Gumede), Fiz (Jennie McAlpine) and Tina (Michelle Keegan) came along to do a Q and A and speak to journalists afterwards, as well as Corrie producer Phil Collinson.

Held far away from the Weatherfield cobbles at the swanky Soho Hotel in that London, we were given scrummy  home made biscuits and cakes (goodbye Slimming World plan) and coffee in the hotel's plush lounge before watching a special screening of two of the wedding episodes on a proper big screen in  posh comfy armchairs.

It was quite strange watching Corrie on a big cinema  screen -  it gave it the look of a film rather than TV and the HD effect highlighted every single flaw and wrinkle of some of the older characters! (I'm talking about you Helen Worth and Nigel Havers!)

Chief blogger Flaming Nora has already given a  plot rundown earlier today on this blog with pics of what's going to happen in the wedding episodes, so there's not much I can add storyline wise without giving stuff away we were specifically asked to keep secret, such as exactly what happens on the wedding ceremony and whether the not so happy couple actually tie the knot.

What I will say is that viewers will be in for a treat as Fiz and Tyrone's  big secret looks set to be blown publicly, with dramatic consequences from vengeful Kirsty in its aftermath (especially for Tyrone who will be wrongfully facing a trial for abuse) and  there's some impressive acting from Alan, Kirsty and Natalie.

We were also given a preview of some future developing storylines and the one that stands out for me is the Lewis - Gail situation, which will be developed with increasing black humour.

There will be some genuine laugh out loud moments as Lewis tries to evade any real physical intimacy with Gail while continuing to butter her up shamelessly so he can succeed in his evil plans.

Also it looks like Tracy Barlow and that supposed charming rogue man in the factory whose name I can never remember - Rob - will be getting closer in the future.

After an official Q and A, we mingled with the actors - I ended up in the loos chatting next to Natalie at the sink, who was lovely and friendly, couldn't be more different than evil Kirsty.

I also chatted to Phil Collinson, who seems to have a genuine enthusiasm about Corrie, along with other journalists in the (free) bar.

He confided that Peter Barlow (even with his current weird new face fungus) and Lewis were the main male hearthrobs for the slightly older lady viewers!

Before the screening, he thanked  the Corrie audience for their support. over the last year and said the producers felt "very loved".

The actors were all really nice and down to earth.

Michelle Keegan looks like a slender china doll (in vertiginous heels)  in real life and is much less orange than she appears on screen, despite her recent holiday in Dubai.

Jennie is positively svelte and was rocking it in skinny jeans, jackets and yet more killer heels, a far cry from frumpy Fiz.

Alan Halsall is a real sweetie, full of bounce, humour and life and totally charmed all the mostly female journalists he spoke to.

He was recalling how he was inspired as an actor by Bill Tarmey aka Jack Duckworth and said he doesn't take Tyrone's abusive storylines home and let them affect him - he can leave them in the studio and get on with his private life.

He also said Natalie brings him cups of tea and biscuits to help cheer him up when they are filming the scenes where she assaults him.

Alan  is also far  slimmer and leaner than he sometimes appears on screen -  positively skinny - what is that they say about the TVcamera adding ten pounds?

Natalie said she wasn't a fan of the low cut purple fishtail gown she wears as a wedding dress but that it was "very Kirsty."

It was a lovely day and for someone who is a Corrie fan, it was a thrill to meet some of the actors in person.

I even had my picture taken with Alan for the benefit of readers of this blog (and me!).

Thanks again Coronation Street press office and producers for the invite.