Ashley must realize Claire was being evasive about her mother. There's something very wrong, all right, but it's with Claire. NOBODY but Nobody can smack Hayley like that and be a rational human being. She seems to have made it up with Hayley but it didn't seem very sincere. I'm surprised Eileen doesn't recognize the symptoms even if they all think Claire's mom is ill. Ill. Except when she walked into the Butcher shop, Claire was well and truly busted. Only she doesn't know yet. And how does Mum know the baby's name is Thomas if she's been away and not spoken to Claire for weeks? Claire's mother seemed to spot the problem pretty quick though especially once Audrey noted that Claire has left the baby a few times. So where *is* Claire going with the baby?

Steve is going to have an uphill battle with Michelle. Liz won't mind that in the least. OH god. Karaoke and Liz. Not a good combination. Ooh Fred's selling the pub! Well we did know that, though. He wants to retire to the country with Bev. So why is it such a surprise to the staff? I wonder if the sale will go through as quickly as Adam ditched the factory? Real estate transactions are like buying groceries in Weatherfield. Why would Michelle think she was sacked when Bev and Fred get back if Liz could sack her anyway (and did, just last week). Fred hired her, for Pete's sake. Now Steve has suggested that Liz get a mortgage and buy the pub herself. Do you think she's got any savings at all for a down payment? Me either.

I forgot that Violet was back living in the pub and not with Eileen, Sean and Jason. Well that's what Michelle meant when she said Vi was living with people old enough to be her grandparents, yes? So now Violet thinks Jamie might be "the one". That, my friends, is the DREADED Soap Opera Phrase of Doom! Didn't take long either. One mention of let's move in and Jamie's trainers are already leaving skid marks on the floor. He's a terrible liar! He's invited her to move in with him and Frankie (yeah. *that's* romantic) but he's not really jumping for joy, is he?

Looks like all the tat and junk in the Battersby home is going to find a new home if Cilla can get it flogged. If she's smart, she might be able to flog some of Les's old albums if there's any left. Not that she's going to use any money she makes on actual bills or anything! David still skipping school Blah blah blah. Boring. I used to like David but he's rapidly becoming my most disliked character. Kid's still a good actor though. David's going to swing allright, when the kids he named find out because they sure as heck haven't done anything wrong. If Gail thinks he may need help then how long is she going to let it go until she gets it for him? Audrey's still looking for love, even at her age and i say, good for her! Chesney must be going to a different school than the little ones. He started on a different day than them for a start, plus he's wearing a different uniform. Out of Bessie Street school and onto the Comprehensive then? 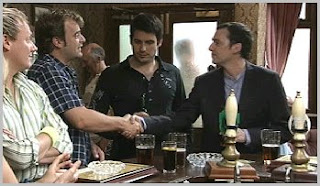 Speaking of Hayley, Liam certainly got the wrong end of the stick (no pun intended) when he thought Frankie was the transexual rather than Hayley! I guess he's going to have a bit of a climb to get Frankie to date him now. Maybe he and Steve can commiserate! Now it looks like Liam and his brother are going to buy Adam out of the factory. Will Danny be trading the devil he knows for one he doesn't? Sounds a bit like Paul owes Liam one. Wonder what for? Well it looks like Liam and Paul are really going to fleece Adam and he's certainly dangling on the hook having taken the bait. Paul's the businessman and Liam's on the markets, eh? He should be ok for the sales patter then. Adam of course, thinks he doesn't need any advice and the deal will be signed, sealed, and delivered into his pocket before Ken gets home. I wonder how long it will take him to get through 80 grand? And i wonder what Danny's going to say! Paul's not too pleased that Danny is the ex of the woman Liam fancies. He's right too, Danny's not going to be very happy about Liam wanting to date Frankie and then working right at his elbow. But Adam Barlow isn't worth the spit on Mike Baldwin's cigar!

Now we know, Sean's 30. Lessee, Violet is probably only about 22 or 23, Jason is about 22 isn't he? (i can't be bothered to look it up), Jamie is about 27 or 28 i think. Liam said he was 32, i'd say and the older brother, Paul looks about 40. Did Liz say she was married to an Ulsterman only i distinctly remember her filing for divorce from Jimbo.