Liam didn't seem to waste any time telling Carla the secret about Dean. He says it's because Paul took himself out of the picture but he was only been gone five minutes. More like a tempest in a teapot. It's a sure bet that Michelle is going to find out about what Paul and Liam did on the night Dean died. Didn't take Liz long to start running after the new brewery guy, Derek. I think she's getting bored with Vernon. I knew that would happen. Then Vernon squashed her plans with a potential fancy man.

Tracy sounds like she's starting to fall apart. She wasn't very convincing with the barrister and even her solicitor is now having doubts i think. All those clever questions are there for a reason and they're working. And i don't think i'd be telling that Charlie had affairs. Isn't that a good motive for murder? Tracy doesn't "get" that she can't put on a performance in court. Of course she doesn't get it, her whole premise in this situation is a performance. Peter thinks Maria is smart even though she just admitted not being able to see through Charlie's games. Deirdre decided to take the matter to Gail, and Gail's reaction to David's supposed "nightmares", and then Steve's comment about Charlie supposedly leaving Tracy not the other way around has raised her suspicions even more. So what does Tracy do? Go on the offence. Works every time with Deirdre but it won't be so easy to squash those doubts now that they're seeded. Tracy going on about how she's only playing the game pretending to be best friends with Claire because she needs her testimony isn't helping. Deirdre has to testify and so does Claire and it looks like Tracy realizes that her mother is entertaining doubts. I think Tracy is starting to feel things closing in on her. 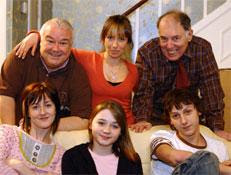 So this is Casey, the woman that Claire has been telephone councilling. She lost her baby, right? New neighbours too, and they are related to the one that was in charge of the building project. Jerry Morton et. al. They've bought Charlie's house. From whom? That's what i want to know. They've bought the house Charlie owned yet Jason is continuing to run the business. Why wasn't that sold as well? I think they're going to have to fit all the family in with a shoehorn. They didn't waste any time ticking off the neighbours with loud music. And he seems pretty good at scamming the sign people to get a few bob off. I expect the junk food joint will do better than the bakery though. Mind you, Jerry has a bit more cheeky charm and charisma than obnoxious Diggory did. Now let's see, the twins are a little older than David and Rosie but i can't see Rosie fancying that scruffy Darrel though David could crush on Mel. The younger girl Kayleigh looks like she's about Sophie's age or a shade older. Could be a romance for Ryan there. I'm surprised Sophie didn't develop cow eyes for Ryan, too. 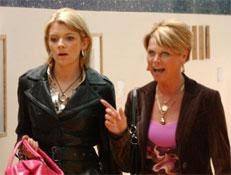 And why is Joanne so vicious about Vicky and her gift of cakes? I just don't buy Leanne as a real estate investor/seller. There's something fishy there. Violet can still have a baby, with possibly a bit of difficulty. Well that's good news, isn't it? Janice managed to get her job back again, only because they needed a good machinist and he didn't tell Leanne and Liam seemed to enjoy her flirting with him to get Jan's job back for her. (Aw but isn't he cute?) Now we just have to get our heads round Leanne the prostitute who's using the name Rachel. I'm surprised the concierge was so welcoming to Leanne. Is he getting a cut? Leanne reckons being an "escort" is honest but as Janice pointed out, she's lying about what she's doing and using an assumed name. I agree with Janice. Leanne is deluded. She's go nowhere to go but down if she keeps on.

Dev and Steve must go play golf with Paul sometime? Golf? Steve? Not sure Steve would know which is the business end of a golf club. Paul might have come across like a pro but his first shot went into the trees. Something tells me he's a bit more of a plonker than he wants people to think or is he just suckering them for that bet he made? Seems he's blaming his new clubs. lol Sign guy at the new fast food place.. "Leon's Neons" ? lol! Laughed at Norris finding all the rubbish in Chesney's paper bag. After years of working with lads you'd think he wouldn't be surprised at all. And Norris was nasty to Ryan and ended up making a prat of himself as usual. You know, for the amount of lovely looking lingerie they sew in Underworld in the usual colours (white, red, pink, black, purple) they sure had a lot of rolls of ugly print material in the stock area of the factory!