Corrie A-Z: J is for Jiltings 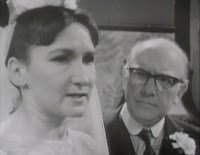 These days, Corrie weddings being interrupted by revelations or disasters are common occurrences. Between the 1960s and 1980s, weddings were a quiet affair – maybe the groom or the bride was a bit late but the couple were married off by the end of the episode!
There were a few exceptions though. In 1964, timid spinster Emily Nugent jilted her pompous boss Leonard Swindley – even though it was her who proposed! Swindley didn’t really love Emily but thought, at 48, it was time to settle down. And although she had loved him from afar for years, Emily realised that the love wouldn’t last. She sent Jack Walker to tell Swindley she couldn’t go through it. Swindley wasn’t devastated and even went to stay for a couple of days in their honeymoon hotel. Swindley and Miss Nugent remained friends and colleagues until he left the area in 1965. He sent a telegram in 1980 to wish her luck on her marriage to Arnold Swain. I can’t recall he sent one when she married Ernest! 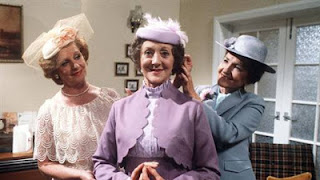 Twenty years later, the best remembered jilting happened – the Wilton jiltin’! Derek Wilton and Mavis Riley had been having an on/off relationship since 1976 and they finally came to the decision to marry in 1984. Indeed, Derek had to fight against potter Victor Pendlebury for Mavis’ affections. They became engaged but on the wedding day, nerves got the better of both of them and a double jilting occurred. Unaware that she had also been jilted, Mavis was worried about Derek but was furious to find what had really happened! Derek left for Bournemouth and although he made a brief visit in 1985, by 1986 he visited Mavis to tell her that he had married Angela Hawthorne. Mavis was again furious but the marriage didn’t last. In 1988, Derek returned again to Mavis’ life and proposed to her and they finally married. The marriage lasted until Derek’s death in 1997. 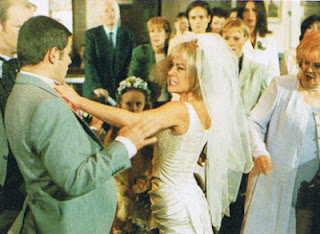 In 1999, another jilting took place when Sharon Gaskell, Rita’s former foster child, found out that her fiancé Ian Bentley was having an affair with Street vamp Natalie Barnes. After walking down the aisle, she thumped him and refused to marry him. Sharon tried to rebuild her life and Rita offered to sell The Kabin to her which Sharon accepted. But Rita was angered when Sharon rekindled her relationship with Ian at the end of the year and married him. Rita had to swallow her pride and buy the Kabin back from Sharon.
Others include Alan McKenna jilting Fiona Middleton in 1997; Danny Hargreaves jilting Sally Webster in 2001; Shelley Unwin having the bottle to dump controlling boyfriend Charlie Stubbs in 2005; Jason Grimshaw doing a runner through the toilet window on the day he was meant to marry Sarah Platt in 2006 (they did marry in 2007 only to separate soon after); and in 2011 Sian Powers dumped Sophie Webster for falling for Amber Kalirai.
Can you think of any others?