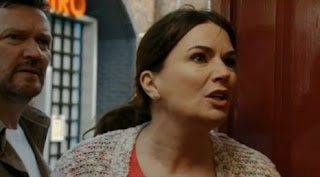 (This post was originally posted by Chewy on the Coronation Street Blog in July 2013.)

What a nasty piece of work Anna has become lately, forcing Faye's dad out of town, because she wants Faye all to herself, not taking into account how poor Faye feels about it all.

Then when Tim is telling Faye that he has to leave, Anna pulls sour faces at him, as if its his decision to leave. I used to be on Anna's side in the argument, but I think I've changed my mind.

Anna has basically won anyway, Faye came back to No.6 of her own free will, but that's not enough for Anna, so she wants to sever the only link poor Faye has back to her blood relations. As if that's not enough, she's also decided to take her anger out on poor Roy and Sylvia in recent episodes. Not to mention her bothering Dev about Tim a few days after Sunita's death. It seems Anna thinks the world revolves around her alone these days

Anna's behaviour has been terrible, but she's hardly a nasty piece of work. One of the things I like about Corrie is that the characters are (most of the time) realistic. In the real world, there are no saints, just fallible people. Anna is overreacting, treating Tim badly and inadvertently hurting Faye, but her behavious hasn't come out of left field. Faye is easily hurt, and Tim has shown himself to not be a great parent (at least not a great custodial parent). Anna is doing what she thinks needs to be done to protect Faye. She's approaching the issue with all the finesse of a rottweiler guard dog, and it doesn't help with someone like Owen egging her on, but her motives are honest. What I hope happens is that Anna sees that she's been pushing this too hard.

Her character has changed and I don't think fundamentally that is ringing true she shows little compassion whereas she used to be a compassionate person she was more likable when she was with Gary's dad
Being with Owen is enough to change anybody I guess....

Anna did start off as a very nasty person - remember the Windass kitchen cupboard issue and the horrible things that happened to Joe Macintyre, thanks to them? Then the Windasses moved to the street and changed course. She's mellowed and for a while became a lot more likeable, but she is certainly showing her nasty side with Tim. I know she has her reasons, but I think Owen's attitude has rubbed off on her a bit.

The fact that Anna behaves like an attack dog when she thinks her children are being threatened does not mean that she is not compassionate. It means that she has a blind spot. We all do.