Facts about the Rovers Return 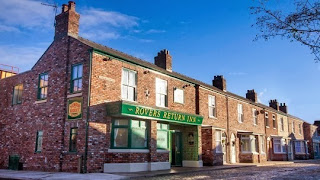 Here's a few interesting facts about the Rovers Return and the new set, according to the ITV website

The current set is the fifth version of Coronation Street.

The new Street set is a bit bigger, closer to real life dimensions. The previous set was about a third smaller than normal streets would be. This new set also has the light standards set back a bit and the kerbs dropped to make it easier for the production staff and cameras to move around.

The tree in front of Audrey's Salon has been replanted. ITV says "The tree outside Audrey's salon is an Alnus Icana, delivered from Holland it weighs six tonnes and stands 40 feet high. It is around 25 years old and is one of the largest trees ever planted in the UK"

About a quarter of the bricks used were reclaimed from Salford de-constructions and most of the cobbles are reclaimed as well.

Both Streetcars and Underworld sets will no longer be housed in the large indoor studios, they will be behind the doors on the outdoor sets. (I hope they have installed heating. That was one of the complaints when Underworld was in the same place in the old set so they finally moved it indoors).

And yes, the Rovers has a second upstairs window and not before time. With living areas and kitchens and bedrooms for all and sundry up there, it wasn't very realistic looking. It still doesn't seem like the building is big enough to house everything and everyone but that's television for you. At least we're back downstairs in the pub living quarters instead of in the upstairs pseudo flat we saw when Steve and Becky were married.

There's a good book now out by Tim Randall about the Rovers Return. Read our book review of it here. It's a great Christmas gift for any Corrie fan!