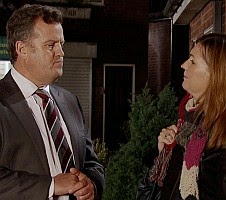 So Brian has decided to have the interview anyway, behind Julie's back and much to Marcus' disapproval. Now Brian has the job if he wants it. But he's late for the Fostering meeting and Julie's highly embarassed. Typical of Julie for making a big deal out of what was only an assessment of the flat. Brian managed to undermine Julie to the Social Services woman. Will Julie find out why they're going to be turned down. Sneaky man!

Brian now has to put up with Julie second guessing herself knowing full well the bad news is coming. And she's seeing the responsibility of parenthood looming large and scary. Brian's a coward and Julie's going to be crushed before long but he decided to be the one to tell Julie that they are turned down for fostering. Now he'll probably have to do some fast footwork to stop her finding out the real reason. I guess unless Julie calls the social worker, Brian might have got away with his betrayal, having intercepted the letter. Do you think he'll get away with it? Probably not.

Nick is joking that he doesn't know the Canadian National Anthem. But remember, he lived in Canada for a number of years! Shame on him for not learning it! He may have come a long way but he's still got a long way to go, and showed it by missing that meeting with the wine guy and losing his temper with Simon. Nick is scared and that's not helping. He needs to start keeping a little notebook for reminders or else he shouldn't be back to work yet. I do like that Nick isn't getting over this injury quickly and it's interesting to see the kinds of complications his condition has on his family. It's heartbreaking for Nick to see what effect it's having, too. Adding to the stress and probably hindering his recovery a bit. I do hope that Nick isn't going to push Leanne away. Watching Gail fawn all over him, though. That's creepy.

Peter is not having Nick shouting at Peter and it's fair enough, he does have to communicate with Leanne and Nick. He has to look out for Simon and Leanne was a bit too defensive because she knows darn well Peter had a point. Peter's miles away and so is Carla. Probably for different reasons.

I wonder why they need more staff at the Bistro. They have Kylie back, there's supposed to be Stella and Gloria and there's Leanne. That's way more than they usually have anyway. Leanne is a lot better at walking on the eggshells around Nick than Gail is though maybe that's a mother - son thing. And what's the panic about Simon not being there after school? That kid made his way back from Blackpool by himself at the age of 6. Just contrived to cause more friction with Nick, Leanne and Peter and everyone else.

David needs to get  himself together or he'll never get his old life back. Nick wasn't happy that Audrey has taken David in. Gail kept at him, no wonder Nick snapped at her.

Stella's dragged out of the character cupboard to attend Karl's sentencing. 25 years for a self admitted killer and arsonist. Not much when you have lost someone. If i was Stella I wouldn't be fondly remembering Karl especially on a day like this. Gloria sure has changed her tune about Karl, hasn't she? 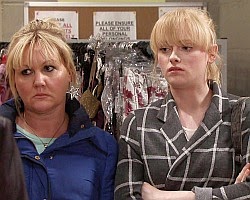 I see Sinead has been industriously sewing knickers for Beth to win the competition since we haven't seen her in awhile. And Beth rubbing Sally's face in it if she wins is always a bonus. Because rubbing Sally's face in anything is a sport! Sally was really mean to Kirk. I reckon that Sinead's sewing is going to be way better than Beth's and she'll end up in a job at the factory. Even if Sally doesn't win the competition, she's mollified by being made manager while Carla and Peter are away. Her airs are put on well and truly now. She even got an invite to the wedding. Kirk has had a great week after being off screen for so long. He's provided all the chuckles for me! So the factory competition is done and Beth got busted just before they were about to tally up. They thought she stole them so she had to admit the scheme or lose her job. Kirk's disappointment probably hurt worse than the 100 quid coming out of Beth's pay.

Norris might be an eco warrior as far as saving energy goes, but I doubt very much we'd see him up a tree. Mary seems to be very at odds lately, lonely and drifting. I think she needs to move into one of the flats, maybe the one over the kebab shop now it's empty. She's really evoking my sympathy these days. Grace is still targeting Mary I see. Anna really does pander to Faye, never saying no but though she said she didn't think Faye was mithering Mary, it looks like maybe she was vaguely suspicious but backed right down when Faye went all moody about the questions. Faye is a terrible liar even if Grace is a good one and even Izzy has suspicions about Grace.

I see they're giving Deirdre a holiday to be with Ken. Steve is going back to school, partly to keep up with Amy but partly to have a chance to skive off. How much do you want to bet he actually enjoys the course once he gets into it? Excuse me? There are no 2 a.m. flights to Canada from Manchester that early in the morning, or even any shuttle flights to London to catch a flight to Canada that time of the morning. Ever. It's overnight on the way back to the UK. Trust me. I know these things. Katy's out of the cupboard with a mate that hates her job, just in time for her mate, Steph, to answer the call of the Bistro Staff Wanted sign. And if she had to fill in an application, why didn't Gail get her one long before Leanne returned. 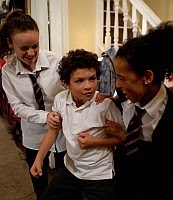 I think Faye is having more doubts about Grace. And it sounds like Anna is finally having doubts about her, too if she's willing to ask Sally for advice. And Grace is SO a bully, jerking Faye around to her whim. The bullying went over the top, with Grace and Faye taking on Simon in Number 1. Let's hope this is going to be the end of it all, the last straw. Looks like Faye has realized that she's a bully as well because of Grace. She might not quite be ready to walk away but it can't be long. Well the truth comes out now. Simon told on Faye at least and Anna is facing up to a raging Leanne *and* Tracy who's more upset her makeup was trashed. Faye can deny it all she wants and she knows the buttons to push with Anna but Anna is realizing Grace is bad news. And there seems to be a phone video as evidence so that will be the catalyst.