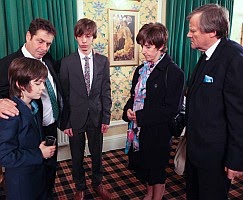 The distance between Roy and Hayley is wider than it ever has been. Roy being Roy, has done research in to similar situations and the effects the drugs can have and it only enforces his argument. Hayley is trying to cope with Jane's funeral and having this on top of it all isn't helping. Roy discovers later, though, that while Jane planned her own funeral, her husband thought it wasn't really what he would have done to send her off but lied and said to Jane it sounded perfect. He also maintained a lie for years, going to church and taking up religion for her sake because he loved her so much. That's given Roy a lot more to think about than hard facts. And he resolves to lie that her words and all that they've seen at the funeral have convinced him.

Hayley's relieved. Is he doing the right thing? I think so. I think he does understand a bit of where she's coming from but he can't really agree to lose one minute with her but he can barely look at her or be in the room while he's lying because Roy is honest to a fault. But Anna knows he's done the right thing. Why spend the rest of what time they have arguing. Make the days the best he can for her and maybe she'll want as many of them as she can.

And Hayley is trying to listen to classical music to hear what it is instead of what it isn't.  Who would have expected Roy to come over all rock and roll in the midst of an orchestra? I'm with Hayley, it didn't really work for me and apparently her passion is glam rock. Queen might very well be Glam in their early days but "Crazy Little Thing Called Love" isn't glam rock in the least. "Those Were the Days of our Lives" was more prophetic for the two of them, but still not glam.

Hayley made us all cry when she broke down. Roy's determined to make Hayley's final months the best for her that he can in spite of his own doubts. Good boy. Why is Hayley worried about making Carla's wedding dress? I seem to recall she's made wedding gear before. I suppose Carla's standards would be pretty high. I would have thought Carla would have told Hayley what she wanted for a wedding dress or showed her the photo of the one she wanted and couldn't get. Letting Hayley, the fashion maven (not) of Weatherfield design her dress was bound to cause ructions with stylish Carla. Carla saved it though, by taking one or two of the designs, combining them and modifying them. Result! Too funny watching Roy scutter about getting under Hayley and Carla's feet, including blowing up a rubber glove! HA! 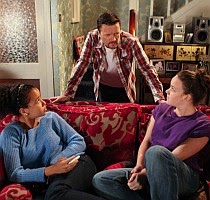 Grace's bullying continues and now Simon has to take the brunt of it. He is ridiculed into shoplifting from Dev's but though he gets away, Dev has told Peter and Leanne. Now what? Carla mentions  how good Tina was with Simon and it's given Peter an idea. Hire Tina for a part time sitter. Hmm. Sounds like a good gig.  Owen is now sure that the girls have had some involvement in Simon's escapades but Anna won't hear of it.

Julie looked wonderful in that bright orange coat and hat. She's got blinders on and can't see that Brian is rather reluctant about the fostering. And it turns out he's looked into another job and he's got a job interview for a museum director in Wales. So Marcus is taking Ken's place as Brian's confidant. Will Brian tell Julie the truth? Will he heck. Where would be the fun and drama in that? Besides, we all know that with Julie you can't always get a word in when she's over enthusiastic about something. He couldn't bear to let her down.

Tina is now a lifesaver, having offered to walk Simon to school because Peter and Carla were both late. I still can't understand why all these Bessie Street kids have to be  ushered to and from school when it's only around the corner and they are, many of them, 8 to 10 years old. There are crossing guards to get them across the roads. Faye and Grace are now 11 and in the next level of school and they are allowed to go on their own now. Finally. I think they were even coming and going on their own in their last year at Bessie St. too because I don't remember Anna having to run off and pick Faye up at school unless Katy always did it. 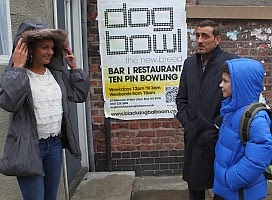 Peter is worried about Simon but Carla is more worried about the wedding. She still hasn't got a dress. Peter thinks second hand will save them money. That's not Carla's gig. She ends up running around looking for dresses and still can't find something. Is that such a good idea?  So Tina's well and truly dumped and thoroughly single now. I never felt he was the love of her life, anyway. With Peter coming to her defence, there seems to be a new warmth there. As a veteran soap watcher, I can clearly see where this is going. And Peter has roving eye genes.


Speaking of which, Katy seems to be in the character closet these days. Mourning Ryan's departure perhaps? Izzy hasn't been seen either and we barely get a glimpse of Gary. Dev had a look at his tummy in a shop window. Are we in for a Get Fit storyline? Oh look. Izzy is out of the character closet. So is Marcus. Not seen either of them for yonks.


Kylie's still bitcing at Tina who's been bitching at David for freeloading. Kylie then bitches at David and maybe that finally gets through. No, I guess not. Straight to the pub for a vodka or four. Fish and houseguests stink after three days. Seems like David has overstayed his welcome.  David really is pushing the envelope.  Meanwhile, Tina has finally realized that Tommy isn't coming back. He already said so, didn't he? So why she thought he might change his mind, oh well... wishful thinking I guess. He's told her it's because she puts everyone else first. I would think being unselfish is a good thing but really, i guess he means she never puts him first. She's chucked David out. a bit too little too late unfortunately.

Kylie gave David a hard time over the money he took out of the account and she's not letting him see the kids. He could probably make a good case for that but he can't afford a lawyer anyway. I think Audrey is starting to soften and she left David mind Max for a bit. They don't think Kylie will find out. Didn't have to worry about keeping a 6 or 7 year old from telling tales, Kylie got off work early and everyone was busted. 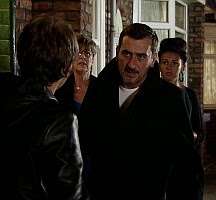 David's on the outside looking in, lurking around corners. One small part of me does feel sorry for him but he did bring it on himself. He was kind to Tina in the cafe. She was a bit rougher on him than needed, I think. He really is the pariah around the Street these days. He wasn't able to convince Tina to take him back in. Not surprised he went and dove into a bottle and then got aggressive with Peter who just walked away. It nearly broke Gail's heart to see her son in such a mess.

Nick's got no sympathy, as you might expect, and neither does Kylie. Can't blame him for getting upset that Gail is feeling bad for David. Audrey's sympathies are lining up with Gail's. It was inevitable that Audrey be persuaded to take him in after Kylie tore a strip off him and forbad him to come anywhere near ever again. Finally, Gail admits that what David went through at Richard's hands made an impact. Now whose fault is it that child never got councilling? Too right she needs to take on some of the guilt.

Can we possibly hate this incarnation of Todd any more? Oh yes, I'm sure there are great heights to come to his disdain. He was a snotty stuckup tosser the last time he visited so he's only graduated into utter w@3kery now, not a great leap. Why bring a character back if you're going to change their personality completely? If they don't soften him and give him his comeuppance soon, he will end up working for Chesney at the kebab shop and then catching the next cab out of Weatherfield, with all of us making sure the door hits him on the arse on the way out. Todd was able to switch on and get down to business easily. It's not rocket science or brain surgery. He's a sarcastic tosser. Numpty.

Todd never stops using people does he? Eileen for cash, Lloyd for an advance on his wages (fail),  Sean for an escort on a night out and someone to iron his shirt. He's also sarcastic. That whole business about the last biscuit was stupid and I think he was winding them up on purpose. He even managed to nick a customer and a cab and keep the cash and he managed to talk them all around, silver tongued devil. The last biscuit, the last cab, this is becoming a habit.

I laughed at Todd grabbing the airport run and having a fistful of cash. I've taken a mini cab from Salford to the Manchester airport lots of times and the most I've ever paid was about 20- 25 pounds plus a few quid for a tip. Todd's customer had to be a fairly local customer or they'd have called a different company and Weatherfield is supposed to stand in for Salford.

That's a heck of a recap of the week that was. Sadly as boring as the current storylines.
Haley's health situation is sad
Todd is an arse
David still feeling sorry for himself - nothing new
Gail & Audrey are a pair of dithering twits
Eileen & Julie are dimwitted as well as blind
Tina needs to get out the tanning booth
Liz - I'm still at a loss for words as to why, dear God why!, they brought her back
Faye & Grace belong together, each as manipulative as the other
Wow, why do I watch this show? These past couple of months has me really wondering...

This is around the time Gary and Owen came to Canada to meet fans, so they are on some trip or other on the show. I ahdn't really thought of Gail as a 'no friends' but she is. Other than her mother, and sometimes Sally, the other shrew, who does she talk to???

Sally does seem to be Gail's only friend these days. She was never that pally with Liz and she certainly isn't friends with Eileen!