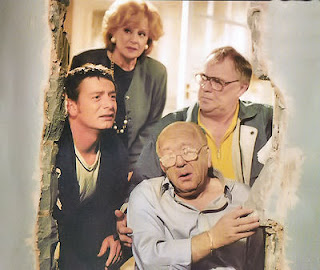 This is the first in a series of occasional photos from Coronation Street's past for your perusal and reminisence. Think back to the late 1990s. Alec Gilroy was living in the flat next to Rita's and the two old friends were becoming close. Alec realized he was quite fond of Rita and after she nearly died from a faulty gas valve, he realized how much he did love her. With that in mind, and with her permission, he thought a door between their flats might be handy for those late night visits and also useful for emergencies. When Pat the Builder was seen to be taking far too much time with his work in creating the new doorway, Alec decided, "How hard can it be?" and took a sledgehammer to the wall. It collapsed on top of him!
Posted by Tvor at 06:36

No she doesn't change much, does she? The shade and amount of the red hair is all. We used to call her the Big Red Wig.