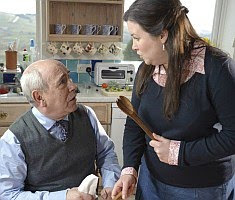 What a month was April 2010 in Weatherfield as we reach the end of it on Canadian screens! The lost of one baby was mourned, and another baby was clinging to life in spite of his maybe-father wanting rid. Love was found in all the odd places and unrequited love rears it's unhinged head as the month ends. Liar, liar, pants on fire, and that's not just Stape's mantra, it could also be Lewis's. For all the details, have a read over here for the State of the Street for April.
Posted by Tvor at 07:27