Corrie plot hole of the week 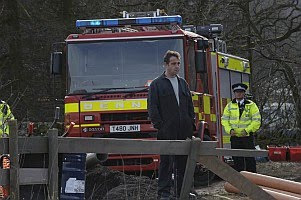 (This post was originally posted by me on the Coronation Street Blog in April, 2010, reposted with permission.)

There was one hole in the plot about the crash this week, a hole big enough to drive a breakdown truck through!

Tyrone didn't take the road to Diggory's, he turned off in a different direction to go to the country pub as a surprise for Molly, yet Kevin drove right past the pub and arrived at Diggory's house.

I would have expected Tyrone to return the way he came to that intersection to take the other turn to Diggory's house that Molly pointed to him. Presumably, Kevin has a Satnav in the breakdown truck to enable him to find people easier, it didn't make sense to me that he would take the wrong road just so he could drive by Tyrone's car parked by the pub and we could say "oooh he drove right by Tyrone's car!" It would have been just as "tension building" to see Kevin at the intersection, check the satnav and turn the other (correct) way. I also notice that it seemed that, though Tyrone had a very long head start, Kevin had caught up with him and passed the pub in awfully quick time.

Other than that, though, the crash was all very well done, wasn't it? Great stunt work, top marks for that and for the rest of the drama. I don't blame Molly for having an initial reaction that had her accusing Kevin of trying to kill her and the baby after he tried not once, but twice to convince her to get rid of the baby. He says it was impulse but, as i said, he came after her two different times on two different days to put pressure on her. That's not impulse. And that's really not like Kevin, either. Kevin is the dad that took his sobbing teenage daughter home and held her and made her cups of tea.
Posted by Tvor at 08:08

I am leaving this comment prematurely as I have not watched all of this weeks' episodes yet. What did strike me as odd is how Tyrone had the keys for his car. I would have thought he would have to get them back for Kev, unless they have two sets and Kevin owns one permanently. I don't think Molly can drive can she?

IT's possible that the keys were in the car and that could be why ty thought it was finished but yeah, he could have a spare set. Don't most cars come with two sets? ours do

I just watched that scene again and Tyrone told Molly "I'll get the keys" and went into the garage to get them. So that's that answered.