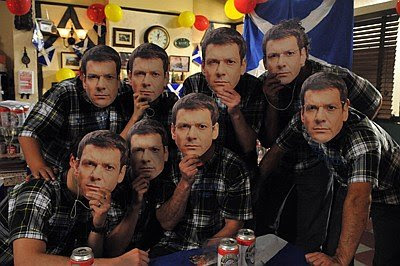 Here's one for Corrie fans in Quebec. There's a town called Hudson, just a bit west of Montreal off Hwy. 40 and once a month, on the first Sunday in the month, a group of Corrie fans meets to celebrate their mutual love for the show. They meet in the town's only British style pub and they have a good old natter and a bit of trivia to round out the day. (That's called a Ping but they don't seem to refer to it as such.)

The group is called the Hudson Coronation Street Appreciation Society (HCSAS) and the founder is an ex-Yorkshireman called James Parry. There's a lovely article in the Yorkshire Post about it. The group maintains a spoiler-free code so anyone returning from the U.K. or reading ahead on the internet is not allowed to reveal any upcoming stories. Canada, as we all know, is nearly 10 months behind the U.K. broadcasts. That's a long standing sore point for Canadian fans who used to be only 6 weeks behind so spoilers weren't quite as much of an issue. But that's a rant for another day.

James Parry was a closet Corrie fan until he moved to Canada and realized that there were lots of like minded fans here. For ex-pats, it's a taste of home and a trip down memory lane. Canada has strong ties to the British Isles and many Canadians identify with the show on that level and enjoy it. Where the culture is still a bit different to ours, as Parry's girlfriend points out, the "life issues are very universal".

I've had a Google around Hudson, and though the interview doesn't say which pub it is, there's only two possibilities and the most likely is Willow Place Inn Pub on Rue Main Street as the other one, the Cunningham's Pub, is described as a *new* Irish style pub. If you live in the vicinity and want to join in, check at the pub to see when the group meets. There does appear to be a Facebook group but it doesn't seem to have been used in several years.

There is an old news article here with some contact info at the bottom, which may or may not still be valid. Your mileage may vary.
Posted by Tvor at 07:43