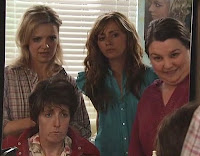 Honeymoon's over award: Tearful star: I think the scales have finally fallen from Fiz's eyes.

Too little too late award: Gold Star: Stape protesting his love for Fiz as she's out the door on holiday without him.
Silver Star: Lewis didn't rip off Audrey but she found out the hard truth about him anyway.

Red rag to a bull award: Gold Star: Lloyd is really winding up Chris and ended up in a punch up.


Promise her forever award: Red Wine star: Red vino worked it's magic on Cheryl as is the Corrie tradition.

Confrontation Award: Gold Star: Fiz-bomb is back but she still didn't get all the truth.

Lines of the Week:
John: "The only person I can talk to is a delusional nutter who's got it into her thick skull that I actually fancy her when the truth is, she actually makes my flesh creep!" Charlotte: "It's us that belong together!"
Dev about Fiz leaving John: "Most women go home to their mothers. But then, I know her mother. Majorca is a better option."
David about Gail and Lewis: "If me mum likes him, he's bound to be a nut job." (And Audrey did stop and think about that for a second.)
Peter: "It's only a couple of days, what could possibly go wrong?" (you've just jinxed yourself.)
Chesney "Every problem's an opportunity in disguise"
Mary: "Without passion, we might as well be jellyfish."
John to Fiz "Do you think i would risk my marriage?" (Yes)
Ashley "It's no good having a butcher with a monobrow. Looks like a mass murderer!"
Posted by Tvor at 01:30