Let's talk about my mug 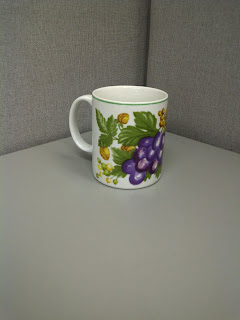 For Christmas one year, probably 2001 or 2002, my husband and I received a set of dishes from my parents.  Great present, loved the set, it included mugs and cups and saucers.  Why am I telling you this?  Well in 2003 when Martin Platt was shacked up with 16 year old Katy Harris, they present Gail and Richard Hillman (I think, although Wikipedia is telling me the canal scene had already taken place) with the same set of crockery.

I was well excited!!!
.
Since then, Gail's use of the fruity designed dishes started the dwindle until they disappeared from her house altogether.  Since then it has been an obsession of mine to point out the Corrie prop whenever I can.  The only thing that appears now are the mugs, only one at a time.  I am writing this now because the last episode where Gail and Audrey were discussing her move to Greece in Gail's living room, Gail was slurping her tea from the very same.  It was then I realised that number 8 is where it all began.

Over the years, said mug has appeared at Rita's cabin, the Websters (which surprises me as I thought it would be a bit too common for Sally), the Factory, and the Duckworths, but not since it was bought by Molly and Tyrone.  Previous to Sunday's sighting it made an appearance in the hands of Janice Battersby while she discussed Trevor's pending departure to South Africa with Carla while sat around the table at their flat.

I myself have let me collection dwindle to only a few of the mugs and the giant coffee pot.  A coffee pot that I have never used, does anyone?

I decided to give a mug to each of my two friends at work Lisa and Karen who are my Corrie buddies.  It bonds us like blood sisters but without the mess.

Are you obsessed with a Corrie prop?
Posted by Tiddsmom at 22:11

LOL i've never noticed the mugs! I probably might have if i'd had the same thing, though. Well spotted!!!

I also noticed that practically everyone on the street had the same set of drinking glasses at one time. They must have an unimaginative prop department at times!