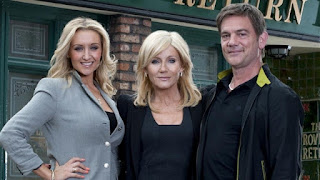 (This post was originally posted by Clinkers (David) on the Coronation Street Blog May 2013, reposted to this blog with permission.)

Maybe the permanent wet weather is starting to affect my mood. Either that or the knowledge that we are in for another drubbing in this year's Eurovision. Whatever it is, I found myself staring at Corrie rather than watching it. Yes, life is a series of swings and roundabouts blah blah blah but last night's episodes had all the vitality and vigour of an old supermarket trolley in a canal.

I think I have totally given up caring about the horrendous FayE. Is she eating properly? Well, feed her hen droppings. Not bothered. She seems to drain the life out of everyone around her. Anna has morphed into a hand-wringing ninny and even the increasingly odd Tim seems to spend a great deal of his time staring into the middle distance. Add to this the cheerless Owen, channelling Len Fairclough, petulant strop-fest Kayteh and her baybeh, plus the gimlet-eyed Izzy and hey presto - a true house of horrors!

Meanwhile over at number 13, Boria is giving meaningful looks at the end of every one of St Ella's utterances. St Ella: "Solicitor's letter etc etc". Gloria: meaningful look. Do us a favour, cut to the chase and reach for your cheque book form the interminable folds of your cardigan.

At the Bistro, the list of employees grows longer. Nick has employed his mother as a cleaner and Gail in turn now gets to supervise St Ella of the Scrubbing Brush as she applies tiny amounts of elbow grease to the even tinier floor. It's official - there are now more staff that customers at the Bistro. Maybe they are going for a record number of employees squeezed behind one modest bar. Not much room left though, unless you shuffle up next to Leanne and that sizable chip on her shoulder. 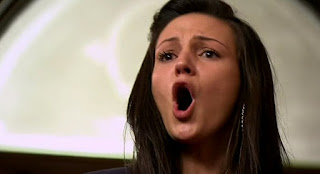 Even the drama of Roy looking for his long lost dad had a feel of 'clunkiness' about it. The idea of long, lost relatives is a soap vehicle used one time too many. It all seemed a little weary and not worthy of the lovely Croppers. Savour Hayley while we still have her!

Full marks though to Tina and her square looking pregnancy (what has she got down there? A tea tray? A selection of encyclopedias?) for turfing out creepy Gary. That lad is trouble and you can only fear for the child produced by him, old gimlet eyes and Tina Tea Tray.

OK, whinge over. Onwards and upwards to better things. I'm off to flick through a few of Deirdre's recipes before dinner. Stuffed marrow anyone? Thought not.