(This post was originally posted by me on the Coronation Street Blog in June 2013.)

On Rosamund Street back in the 1960s, there was a haberdashery shop called Gamma Garments that was part of a shop chain. Owned by the never seen Mr Papagopolous, who was of Greek descent, the shop was managed by Leonard Swindley and Emily Nugent. Papagopolous was a precursor to EastEnders launderette owner Mr Papadopolous who was also never seen (although he did make sporadic appearances). 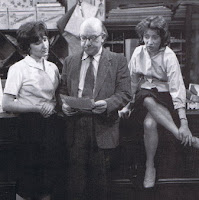 Emily merged her baby linen business with Swindley’s draper business in 1961 when they both faced bankruptcy but Swindley sold the shop to Papagopolous and Gamma Garments opened in 1962 with Swindley and Nugent as manager and assistant. They were of one mind and formed a wonderful partnership and were already friends through their Mission connections and Emily was smitten with an unwitting Swindley. The shop was the background for this budding romance that resulted in Emily proposing to Swindley in 1964. He accepted but Emily jilted him at the altar! 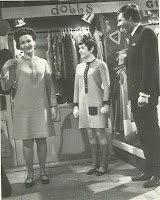 Doreen Lostock worked in the shop in the early 1960s as did Elsie Tanner in 1965. Swindley left the area when he was promoted to work in the head office of Gamma in 1965 and the shop was put in the hands of ruthless Neil Crossley who was a stark contrast to bumbling Swindley. He would take the profits of the shop for himself. Crossley managed to charm Sheila Birtles and she fell pregnant. They later married and moved to Sheffield. In 1967 Papagopolous decided there was no future for haberdashery and the world of fashion was changing. Gamma was transformed into a boutique and Emily returned from nursing her father with a modern look. Dennis Tanner and Lucille Hewitt were taken on as assistants and the shop continued like this until Papagopolous made the shock decision to sell the shop in 1968. Dave Smith bought the shop and opened a florist called ‘The Posy Bowl’ with Elsie as manageress.
And thus the days of Gamma Garments came to an end. These days the shop’s a distant memory and is part of Corrie’s halcyon years. The shop was mentioned last year by Emily at Rita and Dennis’ engagement party.