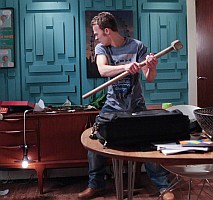 So what's David going to do now? Bide his time it seems. He does do the death stare well, doesn't he? He couldn't admit to Kylie that he knows the secret, not when he saw Max's adoring blue eyes. He wasn't happy that Nick helped pay for the cottage. But we're going to have to put up with the death stare now for the foreseeable future, it seems. David didn't manage to sleep in the same bed as Kylie. He's even flashing back to the Hillman incident, the incident that's damaged him so much. He's blaming his weird mood on not liking surprises. Well, considering the surprise he really got, I can't blame him. He did consider chucking himself off a cliff but again, Max seems to have saved him from disaster. He loves her, she loves him, he makes her promise never to leave him.

And so the revenge storyline begins. But he's not taking it against her it seems. David's whole conversation with Nick is rife with double meanings now, he's sniping and being really horrible to Gail and threatening to chuck her out, walking around in a sulk, giving everyone the death stare. How do they not recognize it? How have they not figured out that he's found out about the fling? There's a nice little bond between David and Audrey, isn't there?

Well, conveniently, there's always a sledgehammer around, isn't there? Last time it was Becky. This time it's David and he's wrecking Nick and Leanne's flat without a thought to how upset little Simon will be. I bet it was fun to film though. Nick reckons changing the locks will help make Leanne feel better. I don't think locks have any hope against a sledgehammer and David now has a copy of the new keys, too. David's plan. Drip poison into Nick's ear about Leanne and Peter while also making it clear the poison is eating away at him as well. He's going to rip Nick and Leanne apart for revenge. David's being suspicously kind and helpful to Nick and Leanne. and he's added Gail into the mix by preying on the dislike she already has for Leanne.

Oh stop fussing over Karl, Stella. He's not worth it. Looks like she's got something in mind. Setting up a party and public event just to tell Karl she's setting the wedding date? Weird. Why does Stella need to tell Dev what she's going to do? Weird. These two are definitely going to end up together after all this comes out, I can feel it in me water. (shudder) Stella also feels the need to stick her business into Owen's regarding the money he wants back to Tina. This woman is insufferably interfering.

She's decided on September for the wedding. What odds are you giving that this wedding won't go off at all? Karl has had a bright idea. A wedding in the registry office. Where the heck else would you do it? Would Stella really go through the farce of a white church wedding? 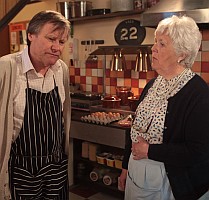 Sylvia and Hayley's solution to Roy's distraction is to pour alcohol down his neck. That's not going to work. Neither is having Beth and Tracy laughing at him from across the pub but Roy has decided Beth is behind the practical joke. Beth is clearly taking revenge and Roy is going to prove it. It really does seem like he's losing the plot and maybe heading for a breakdown. Hayley is getting stressed as well, dealing with Roy. Nobody else takes it seriously so he's going to stay up all night to keep watch to try to catch her.

Sylvia is really worried about Roy and she blames Hayley for putting it all into motion. She really feels all his odd behaviour is stemming from the aftermath and she's right. It's gonna be a long night if you're already nodding off and sucking back on tea at only 10:30 at night! Roy thought staying up all night would help him catch a trickster but he can't keep awake. He just can't comprehend any explanation other than Beth playing tricks. He thinks there might be a clue on Owen's CCTV.

I guess Steve's lame plan isn't really working for Ryan. You didn't really think Steve could come up with any decent plan with women, did you? I have no sympathy for Ryan. I am REALLY getting tired of Chesney always coincidentally either seeing Ryan and Katy together or overhearing conveniently things like Katy wanting the flat to move in with Ryan. REALLY. Owen might not want Ryan under his roof, but it's going to keep Katy at odds with him. Why do I even care?

Sorry, Ryan, you might like Katy but she's a package deal and you're too weak to stand up to her and tell her how you really feel. I laughed at Steve teaching Ryan to diaper a baby using a teddy. At least we know Steve does know how, he looked after Amy quite a lot when she was little. That's one more nail in the relationship coffin and there's Chesney again, witnessing Katy out on a girls' night out with Michelle. Without Joseph. Tiresome. Michelle has put the seed in Katy's head that she still has feelings for Chesney. I think she does too.

Nobody else has any sympathy for Katy who's moaning about being broke. Get a flaming job, then! And Katy's glances at Ches make it clear she really does still have a flicker there, like Michelle suggested. I think Chesney is using Sinead to make Katy jealous, it was clear when she was surprised that he kissed her in front of Katy. It's working, too. What a little hypocrite, not wanting Sinead to be around Joseph when she had no problems moving Joseph in with Ryan.

Tina is in the middle of a firestorm. David defended her decision. He would go against the general flow, wouldn't he? Owen is going to get that baby back no matter how much it costs. Dennis is not pleased that Rita has pledged her life savings to help Tina but Rita doesn't see she has any choice. She might not agree with what Tina's doing bit she's backing her anyway. Now Tina realizes that Rita wants to pledge her money to the cause and she won't have it. 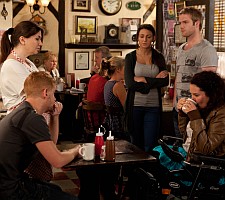 More tedium. Gary and Izzy and Tina and Tommy shouting on the cobbles. I like the surrogacy storyline but this part of it is getting on my wick. They're adding to Tina's guilt and she's starting to have doubts. Suggesting that she breastfeed the baby isn't going to be a good thing if she is having doubts about keeping him and because she wasn't able to do it very well the first time, that added to her upset. Izzy can't help wanting to be informed about the baby's progress and Gary is ready to give up. As much as I think Tina is doing the wrong thing, Anna was well out of order smacking her like that. Some might argue the point. It was a cheap shot. She was screaming at Tina in the middle of the pub and it puts Tina up against the wall of negative public opinion. Even those close to her don't really think she should keep the baby.

*sigh* More shouting and hollering in public, the cafe this time. I don't understand why Tina and Tommy would keep coming into the cafe knowing Anna would be there let along probably running into the rest of the clan. It's really just asking for trouble. Izzy, no matter how angry she is, is still trying to sympathise with Tina and she doesn't think she can take the baby away from Tina. I see what it is. Tina barely recovered from losing her father and doesn't think she can survive giving up the baby. And did you catch the actress flubbing a line? She called the baby Jake but a few days ago she was renaming him Joe.

Insufferably nosy Norris, eavesdropping on an argument has decided Rita and Dennis' marraige is on the rocks. Meanwhile, Emily really did end up on the rocks, tumbling off a footstool. You know, Norris insisted it wasn't his fault but he shouldn't have let a woman her age go up on a footstool to wash the windows anyway. Marcus was coincidenally on the scene. He always is! Even then, it was all about Norris, who didn't want sirens because he was getting a headache. Never mind his "beloved" Emily could have given herself concussion on the cobbles. (It was only a sprained ankle in the end) Have I mentioned lately how much i detest this little worm?

Norris as Nurse is going to drive Emily spare. She's going to take that cane and give him pause for thought. He insists on 24/7 nursing but she's pushing him out the door. Is that guilt? Maybe it's a wakeup call for Emily, too.He thinks Emily's feeling her mortality. It's probably got a lot more to do with Norris and Mary hovering constantly. But it's given Norris pause for thought. Why is he upset that neither Spider nor Freda has been to see Emily in her recovery when he hates having them around and is always spiteful to them? Norris is still hovering over Emily but she hasn't seemed to mind over much. He's being even nastier than usual, though, about all the attention she's getting from everyone including the absent Spider and Freda.

Chuckled at Gail trying to keep up with Max. Seems Tim is still slapdash in his parenting efforts. I guess Anna may remember she's got a daughter now. Faye still isn't giving her mother an inch.