Corrie A-Z: G is for Gossips

Whether we admit it or not, we all like to hear a bit of gossip. I personally admit that I like to hear gossip and my mum and my gran call me ‘Keyhole Kate’! And without a doubt Corrie has had its fair share of gossips over the years. And you can’t beat Coronation Street for fresh, daily gossip. It has been said that gossips are the most dangerous and destructive characters in a show – be it hearing some juicy gossip or broadcasting it to all sun and sundry. This can result in the destruction of a whole family or community. Gossips usually show impartiality and don’t side with any party. They prefer to remain neutral so they can receive gossip and news from both sides.
Since its debut in 1960, Corrie has included gossips in its format. The first gossips were the Greek chorus in the snug: Ena, Martha and Minnie. Martha was the one who found the gossip and dished it out to her fellow cronies to discuss over their milk stouts. Elsie Tanner’s dalliances were the main topic of conversation and the goings-on at No. 11 provided much entertainment for the OAPs. 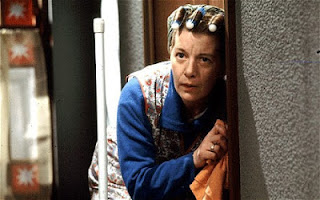 When Martha died in 1964, Ena and Minnie were only seen to pass comment on the commotions of the street and not gossip as such. The role of prattler was passed on to Hilda Ogden who would become the chief gossip of the cobbles for the next 23 years. She indulged in the various affairs of next-door neighbour Elsie Tanner and her close friendship with Len Fairclough and her job as the Rovers cleaner was perfect for dishing out gossip and hearing some much to landlady Annie Walker’s annoyance. A typical gossip, Hilda disliked the neighbours gossiping the ins and outs of her and hubby Stan’s troubles. By the late 1980s, Hilda realised that the neighbours weren’t interested in her jangling and gossip and came to the conclusion that her time on Coronation Street was coming to an end. When an offer to go housekeeping for Dr Lowther in Derbyshire came up, Hilda accepted and left the street in 1987. Although a gossip, she failed to find out that the residents had planned a farewell party for her!

Filling Hilda’s shoes as the street’s gossip was a heavy task. Various characters took over the mantle like Vera Duckworth, Ivy Tilsley, Ida Clough and Percy Sugden. While Vera and Ivy enjoyed prattling about the neighbours, especially about Mike Baldwin, Percy was seen as a busybody, poking his nose in other people’s business – more often than not his landlady Emily Bishop. Audrey Roberts also indulged in gossip, despite husband Alf’s chagrin. But, a typical gossip, Audrey was always on the warpath if anyone gossiped about her breed!

In recent years, the gossips have included Norris Cole, Blanche Hunt and Sylvia Goodwin. While Norris’ nosiness is reminiscent of Percy Sugden, he’s also a gossip and is often seen sweeping the pavement outside the Kabin on the prowl for the latest news. As a newsagent, he sells the news and picks it up first hand! Norris’ ally for many years was outspoken battleaxe Blanche Hunt and they were often seen passing comment on the various shenanigans either in the Kabin or in the Rovers. Barmaid Betty Williams also joined in on occasions. Since Blanche’s death, Norris’ partner in crime has been Mary Taylor.
Can you think of other gossips? Who has been your favourite gossip?

Sometimes Sean is a fun gossiper