From Weatherfield to Walford 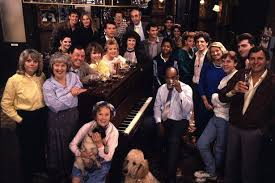 (This post was originally posted by Clinkers (David) on the Coronation Street Blog in February 2015.)

Well, in the spirit of civility and good relations, we should at least raise a foaming tankard of Newton & Ridley's and toast the thirtieth birthday of that other soap. Yes, it was on this day in 1985 that curious Corrie fans first got a chance to size up the new kid on the block.

Back in the day I was more than happy to watch both shows. The 'Enders omnibus fitted nicely into a Sunday afternoon, post-lunch spot and that remained my viewing habit for several years. What became apparent in the early days was that the BBC soap was offering something rather different to Corrie. Weatherfield, at the time, seemed to be a haven for single women. We had Bet, Rita, Mavis, Phyllis, Emily and Ivy all shuffling around without a bloke in sight. Albert Square gave us families, something in short supply on the cobbles at the time.

Maybe 'Enders pitched itself in the right place at the right time. Corrie was a bit cosy and the cast upheaval of 1984 was still making the show seem unsettled. Channel 4's Brookside had gained plaudits for its realism but by the end of the year, the first of many sieges would have been staged on the Close and the show's slow death began. Emmerdale was still Emmerdale Farm in 1985 and probably still had storylines about Dolly Skilbeck falling into a bucket of sheep dip.

EastEnders did get blamed for its apparent tokenism in the early days but it battled on with uncompromising stories about teenage pregnancy, drug addiction, homosexuality and domestic violence. Not the stuff of Corrie and in its favour, our beloved soap didn't try and emulate the goings on in Albert Square. Weatherfield's grittier storylines were introduced in a stealthier manner. Hilda's mugging, Alan Bradley's attacks on Rita and the devastation caused by the loss of Liz McDonald's baby daughter were handled with care.

It's probably fair to say that neither of the soaps are much like they were on this day thirty years ago. Maybe they learned a little from each other. EastEnders eventually realised that a little comedy will keep people watching. Corrie escaped from the slumbering mid-1980s and began to reflect more aspects of every day life. As well as crashing cars, exploding buildings and every wedding day going down the drain.

I've not watched 'Enders since Tiffany Mitchell got squashed by Frank Butcher in 1999. The unrelenting misery finally broke my spirit. Tonight though, one more time, I will tune in and cheer them on. Tomorrow though, back to the cobbles. 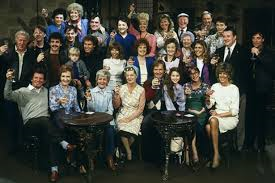 Email ThisBlogThis!Share to TwitterShare to FacebookShare to Pinterest
Labels: eastenders