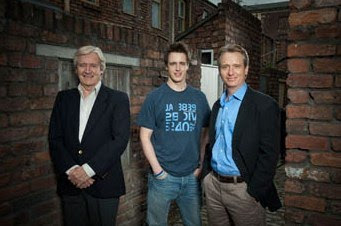 (This post was originally posted by me on the Coronation Street Blog in August, 2010, reposted with permission.)

The Roache "Family Affair"  is on our screens currently. Yes, Ken Barlow has discovered that he has a long lost son, one of the stalwart Soap Opera Plots. This time, it works, considering how many women Ken has had in the past! There was bound to be a love child in the woodpile, wasn't there? Anyway, in the Mirror today there's an interview with the Roache men about working together on Coronation Street.

Bill looks at it as a "dream come true", proudly working with his two sons. As you know, in the storyline, Ken gets back in touch with old girlfriend Susan Cunningham, the girl he was dating when Corrie first started in 1960. He figures out that her son is also his, and if he looked in the mirror or at an old photo, the resemblence is obvious! Linus is a dead ringer for a young Bill Roache, after all. His newly discovered son, Lawrence, is a professor but Ken has just found out that his son Lawrence has disowned his son because he is gay. Ken, of course, is very liberal and doesn't care about these things and tries to play peacemaker this week.

Linus says it's "a dream" to be working with his dad and his brother and James, the new actor-kid on the block, considers it an honour. James is also playing his father in the BBC drama Florizel Street, the story of how Coronation Street made it to the airwaves.
Posted by Tvor at 06:27