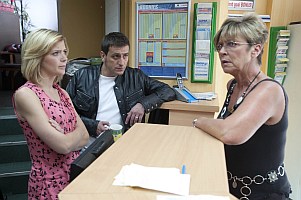 Nick figured Leanne would be on his side after Peter thumped him but she thought the pair of them were childish. She was right. Nick is working hard on her and Peter has a chip on his shoulder the size of the viaduct. Good thing Deirdre wouldn't take "You're sacked" seriously. But if Leanne didn't actually go to Janice's after her fall out with Natasha, where *did* she go?

Peter tried to get the money out of Audrey and when that didn't work, he decided to take half of Deirdre's wages. Anyone that had any idea of getting a solicitor would have him hung out to dry in 5 minutes flat, pulling stunts like that! And it had the required result, Deirdre quit so he could hire John after all. And THEN he had the nerve to tell John he was giving John a second chance because people had given him ones over the years. So where's the second chance for Deirdre?

The fallout continues. Audrey is hiding away and licking her wounds. She thinks everyone will be gossiping about her and laughing. Well, they probably will be gossiping but it'll soon die down. She doesn't believe it so she thinks she might move to Greece anyway. David wants to push her on the plane so he can have the salon for himself! Ah but you didn't really think she'd go, did you? Not if Rita has anything to say about it and she did, with a good dose of honesty, sympathy and friendship. So Audrey is staying and she even managed to brave the Rovers.


Natasha is at her wits' end. Pregnant, no fella, a flat she probably can't afford. Meanwhile Nick is working on Leanne, putting the poison in. As if he'd do romantic things like running her a bath after the first 5 minutes!  Anyway, Natasha was encouraged by Maria to try to get Nick back and she walked in on Nick and Leanne having a talk. There's instant jealousy and she thinks Nick and Leanne are doing the dirty. They aren't but not for Nick's want of trying. But Leanne knows Natasha's secret so she had to tell Nick and he doesn't want to know. Well why would he? He's going to feel well and truly trapped. Leanne gave him the boot again, in spades, pointing out that he has a habit of running away when things get tough. (why does she keep coming round him though?) so Nick must have figured if he can't be with the one he loves, he might as well try to love the one he was with, or at least the baby.

And it's triggered some painful old memories in Leanne too. I really believe she doesn't have any lingering feelings for Nick but there's probably a lot of old baggage that was never dealt with, too. With Peter being a pain in the butt, will Leanne lean towards Nick's flattery after all? 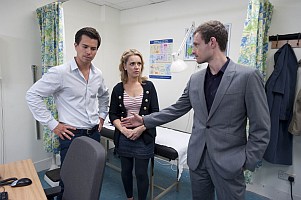 Too late. Natasha had an abortion and didn't find out Nick wanted her back until it was too late and she knows if she tells him she's not pregnant anymore, he will leave her high and dry. What's a girl to do? Why, Lie of course and try to get pregnant in the meantime. Yeah. Like *that's* going to work out well. I guess she figures if she gets pregnant later, he'll be annoyed but will stay with her. Why would you want someone to stay with you only for a baby's sake? And really, he's only excited about the baby, not her. Gail's none too thrilled to be a granny again though. But then she knows that Nick had doubts so serious that he dumped her. She reckons Natasha is trying to trap Nick and she's right but in more ways than she realizes. At least Natasha has Fiz as a guide for what she's supposed to be experiencing. Big mistake to have the exact same cravings/turn off foods, very suspicious.

Nick is over the moon about the baby but he still hasn't actually told Natasha he loves her. Well he did, sort of, he told the pub he loved her but I've not seen him say it directly to her but it wasn't really an intimate moment, was it? He was so excited, that he burst into the doctor's office which is a huge no-no.  But he's just as much of a pratt as always. Natasha says keep it quiet, he announces it to the Rovers. He's so selfish!

Did you catch that nod to Hilda Ogden? Kevin told his father: "The world's yer lobster!" That was classic Hilda. New doctor on the block. Dr. Carter. I loved that he gave Gail a rollocking over telling Nick that Natasha was in the office. Take no prisoners! And just you wait, that could very well be her undoing, our little Ivy-clone that she is, she's not going to be able to keep her nose out.  Ken's digestion is all out of sorts, too, trying to deal with Deirdre. I think they're doomed to be miserable together for the rest of their lives.

Hayley has finally given Mary the boot as wedding planner. Finally! I hope Mary doesn't get all psycho on her! And just in time for the upcoming Hen Night. We'll probably see Mary peeking in sorrowfully through the window, shut out again.

And it's finally time for Becky and Steve to be approved or not for adoption. Becky seems to think it's a competition, that only one couple will be approved and she and Steve won't but it doesn't work like that, though Steve thought a few lame jokes would help anyway. . It might have gone well, but uh oh, Becky shared a cig with someone that turned out to be on the panel! Will that break the case? We'll find out Monday. That woman was pretty bitchy about it too. Sneaking a cig isn't *that* much of a crime! (If Steve and Becky had to be buzzed in to the building, how was Becky going to get back in from the cig break?) (How come Steve didn't smell the smoke on Becks?) 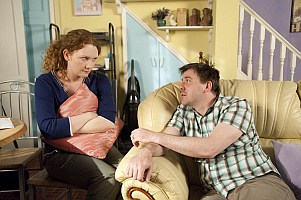 Fiz is back from her holiday early and guess what? She's pregnant too, and decided to give John one last chance. Where have we heard that before? The road to hell is paved with last chances, mark my words, she's going to regret this. He's resigned his teaching job for real at least and lo and behold got taken on at the Bookies, another person getting a  job 10 feet from his door. Then Roy could hardly contain himself with joy for Fiz... he even shook her hand and patted her shoulder and even SAID how happy he was.

Sophie is really being punished. I wonder if Sally even goes to the toilet with her? Sian really is a bit of a bad influence though isn't she? She keeps coming round and risking being seen, which would get Sophie into even more trouble. Now they're sneaking to choir practice to be together. Like they're not gonna get found out? Kids are so dumb, aren't they?

Bill is trying to be cool and not let Owen take him for a fool with the sale of the yard. Something tells me that Bill isn't exactly a shark when it comes to business. Jason was disappointed. He had hoped to be able to buy it someday. If he hadn't already had a mortgage on that flat (what's going on with that anyway?), he might have been able to. Chesney has already started off on the wrong foot, fancying Owen's daughter!
Posted by Tvor at 09:41