Would you approve Steve and Becky for adoptive parents? 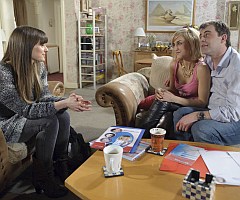 This week we have seen Steve and Becky face down the Childrens' Services panel, to see whether they might be approved to be allowed to adopt a child. We'll find out next week if it's a Yay or a Nay but, musing on the subject, would you approve them if you were on that board, but knowing what we, the viewer know about them?

Let's see...On the minus side:
Steve and Becky both have a criminal record.
They live in a pub.
Steve's ex is in prison for murder.
Steve has been married three times (four if you count Karen twice).
Becky has come from a very unstable background and has been in care herself as a child. 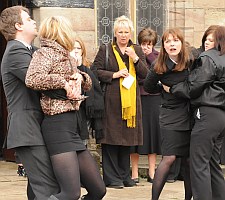 I don't know. Overall, because we like them (most of us, anyway), we'd want them to be approved but I'm not so sure they'd be approval material overall. They are very strict about these things, even for just fostering.

Anna and Eddie? What about them? They've really taken a back seat in all this. We haven't seen Eddie trying to quit smoking, we haven't seen much of their interaction with the Social Services folks. Eddie is a wastrel and has had a dodgey past though we don't know if he's been in jail. Anna is a very earth-mothery type, however.

It really does open your eyes to how much you are put under the spotlight when you want to adopt.
Being a parent is the hardest thing in the world, no one is good at it.

However that said, in real life could all of that really happen to two people? I don't know what the verdict is but my guess would be because of Tracey Barlow, they say no.