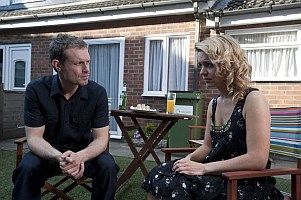 Molly listened to Jack when she wouldn't listen to Tyrone about the stress of moving house. And she let Tyrone think he got the upper hand. For a minute anyway. Thus Eileen gets disappointed and can't buy the Duckie Dobbs house. The factory is back open again. Complete with skeletons in the closet, or under the floor as it may be. Are we sure it was sardine sarnies Julie was smelling?

It's painful to watch Natasha isn't it? She's chasing Nick and trying to force him into a committment he clearly doesn't want. Now she appears to be pregnant and I wonder if she'd got pregnant on purpose? I don't think Gail likes her much and she is subtle but makes a point that she's needy and might not suit Nick. She's right though, Natasha isn't going to change. She got fed up waiting and rented the flat for she and Nick and he dumped her. He should have done it a long time ago. It was sad listening to her telling him she was willing to wait for him to catch up to her emotional involvement. Honey, if it hasn't happened by now, it ain't gonna. He's done the right thing. But he doesn't know she's pregnant. Her crying on Leanne's shoulder is a bit ironic.

Lewis seemed to be having second thoughts too, when Audrey told him she loved him. He ripped off the bookies, making sure he did it while Peter was away. I don't know why Leanne was upset, I'm sure bookies do lose to the tune of 4000 once in awhile. Ok, this was a rip off but just the same... Looks like he was after his getaway money but he seems to have had pangs of conscience and even though he dumped Audrey, he made sure she didn't risk her business and he didn't take her money after all. 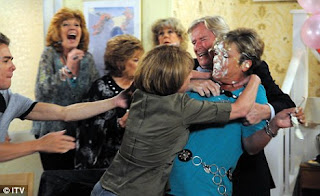 I wonder if he knew the CCTV was on him when he kissed Deirdre? It seems to me he's too smart to have missed that. And she went scuttering on around as if she'd actually had an affair. She couldn't look any more guilty if she tried. And it was soooo funny when she got outed at the party and got cakefaced by Gail!!! Brilliant stuff!

Good incidental music too, the day after at the Barlows, "I Just Don't Know What To Do With Myself" and Ken giving her the silent treatment.

Audrey is holding on to the business and i thought the bickering would start up even more except she said she'd make David the manager. Blood will out. Skill and experience certainly wasn't on the table. David says he will be a qualified stylist next month. Don't you actually have to take classes or write an exam for that? Has he mentioned anything like that? Thought not. 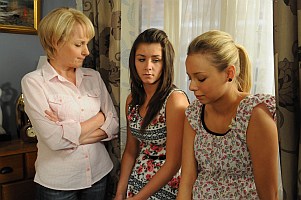 Awww but in the end, Lewis ran off. I wonder if he felt the weight of the honourable gaze of Mayor Alf Roberts over his shoulder? But Audrey is running with her tail between her legs.


Some really good episodes this week! Sophie and Sian got caught out, of course they would. Now they're pulled apart by fate and Sally Webster who blames Sian. Well it was Sian's idea! Their real relationship is bound to come out, (literally and figuratively) soon because they won't stand to be torn apart for long. Hayley's hen night is next week, it's going to be a blast. I choose to believe that Lewis really did back away and leave Audrey with her money intact. I think he did have a few pangs of guilt along the way but he didn't waste any time charming that chick in the airport either.

Peter, grow up. You're a bookie and you lose money all the time, thieves or not. And you can't take it out of Audrey, either. He doesn't blame Deirdre for her mistake, he has no right to blame Audrey, either, and he has no right to take it out on Leanne. He's being a right pratt. Well Nick is certainly taking advantage of Peter's bad mood, niggling Leanne about how Peter treats her. 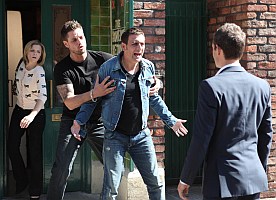 Peter doesn't realize Nick is undermining him and trying to get Leanne back, because that's clearly what he's trying to do. Nick is doing a good job of winding up Peter to make him look worse in front of Leanne so he can point out to Leanne what a jerk Peter is, but i did so enjoy seeing Peter smack the smirk off Nick who's got the most slappable face on the Street these days.

Awww Sean got to visit Dylan. Owen most clearly fancies Liz and Eileen most clearly fancies Owen. This isn't going to end well, is it? Bill pretty much shot himself in the foot after he knocked that bucket over near Izzy. Time to retire, old fella. If Owen wants to buy the yard because there's a flat that goes with it, where's Bill living? He's not in the flat or he'd be upset about selling the yard as losing his home. But it looks like he's going to sell up.
Posted by Tvor at 09:17