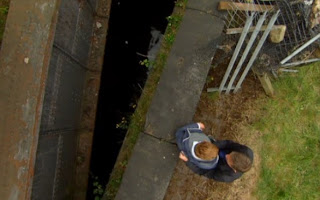 Blinders award: Does Sally not really see that Tim isn't that into her past a bit of hows-your-father?

Evidence award: You can tell what time the photos were taken if you put them on the computer and maybe even a "properties" setting right on the phone.

Pants on fire: Beth telling the school that Craig has had a tummy bug while he's shoving a bacon butty in his face.

Time Warp award: Dev got to the registry office in record time, before the vows were even finished.

Confession is good for the soul: Unless you're Karl.

The Scene of the Crime award: Karl dragged Stella back to the cellar.

Omen award: Broken caketop, And they hope it's not a bad omen. Duh.

Doorstop award: That was a huge sandwich Fiz made for Tyrone!

Defender of the Faith award: Eva was quite vocally defensive of her mother and quite right, too. Beth had a go at Stella for trying to see Craig.

Bully "He's a nutter. He wants locking up" (in more ways than one!)
Sean "Maybe the dry cleaner shrunk his suit and he just can't take it anymore"
Tyrone re women "At the end of the day, we're all in the dark"
Gloria to Karl "You can't speak to her, it's bad luck" (bad luck for you, mate, regardless)
Dev "You both look so happy" (enjoy it, it won't last!)
Dev "What does a guy have to do to get a drink around here?"
Karl about Craig "That's out of order. That kid is vulnerable" (which is why you terrorized him, right?)
Karl "I don't believe in fairy tales" and "Liar, liar, pants on fire"
Grace "You got to learn how to play them, Faye"
Tim to Eva "I heard what happened. Bummer" (understatement!)
Eileen "D'you know Norris, some day someone is going to take that sticky beak of yours and stick it where the sun don't shine. It's probably going to be me!" Norris "Is that what you get for showing neighbourly concern?" (no, but then that's not what you were showing)