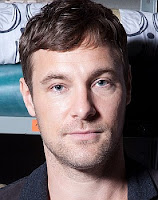 The Downeast Streeters are very happy to announce that they will be working with George Martin Productions and the British Isles Show in Toronto to bring  you An Evening With Marc Baylis in Halifax on Tuesday November 12.

This is a pre-boarding announcement, so to speak, as there are no further details available yet. This event will be restricted to 300 lucky fans with an affordable ticket price. Location and details will be announced in the weeks to come. Check the Downeast Streeters website for updates and we will blog it here as well when we get the information. Circle November 12 on your calendars!

For  Greater Toronto Area fans, you can meet Marc at the British Isles show between November 15 and 17th, several appearances daily. The show will be held at the International Centre, Hall 6, 6900 Airport Road, Mississauga, Ontario. Tickets to the show are $15.00 for an adult.

How the meet-and-greet with the Corrie star generally works is fans line up for autographs and a photo with the star. He will sign for about an hour or so at each appearance and the queues can be rather long so you want to get there early if you want to shake hands and get Marc's autograph. The show itself has other mainstage acts and performances and there are lots of vendor booths to buy goods from the British Isles.