Corrie A-Z: N is for the Nineties 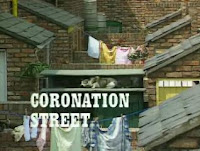 (This post was originally posted by Llifon on the Coronation Street Blog in July 2013.)

In 1990, we saw for the first time the even side of the street in its updated form after the demolition of Baldwin’s Casuals and the community centre. Three houses (Nos.4, 6 and 8), three shop units, a few flats, a garage and a factory unit were built. The layout has stayed unchanged for over 20 years and is the longest lasting set-up on the even side of the street. See here for an account of the history of the comings and goings of the even side of the street during the 1990s.
But despite a modernised setting and indeed in its production, Corrie still received criticism. In 1992, William Rees-Mogg criticised the fact that the show didn’t represent ethnic minorities (although Shirley Armitage had appeared between 1984 and 1989) and that it was old fashioned. Corrie has always been said to be behind the times, even in the 1960s. Many said that 1960s Corrie was in fact set in the 1950s! The show didn’t respond to Lord Rees-Mogg’s complaints immediately. Indeed, it would be in 1999 that the first Asian family would be introduced. Ravi Desai and his children Nina and Vikram would come into the show as the new proprietors of the Corner Shop. Out of those three, Vikram would stay the longest and that being only three years! Ravi’s nephew Dev Alahan was introduced in 1999 as taking over the shop from his uncle and has been in the show ever since.

The 1990s also saw an increase in the number of members in the Corrie cast. With the introduction of a third episode in 1989, more characters were needed. In 1996, a fourth episode was commissioned, broadcast on Sunday nights. Corrie was now weekend viewing! During the decade, new and popular characters were introduced. Newly-weds Des and Steph Barnes moved into the street in 1990. While Steph only lasted a year as a regular, Des would become the latest in a long line of Corrie Lotharios. His many relationships provided storylines during the decade. But soon after marrying Natalie Horrocks in 1998, Des died as a consequence of being injured by thugs. Another popular character was ditzy barmaid Raquel Wolstenhulme. Played brilliantly by Sarah Lancashire, Raquel provided many classic Corrie moments and one-liners. But while she lacked the brassiness of Bet Lynch, they shared the same kind of love life. Raquel was let down by many a man (mainly Des Barnes) and she ended up marrying someone she didn’t love but who loved her very much – Curly Watts. Their wedding in 1995 became central to the first hour-long episode of Corrie. The Watts marriage didn’t last and Raquel left the street in 1996.

The McDonald family also provided much storylines during the decade after moving into the street in 1989. I do believe that the McDonalds and the Battersbys are the only families to ever succeed in Corrie as a family unit. Supermarket manager and later Corner Shop owner Reg Holdsworth also became more established as a comic character, forming double acts with assistant Curly Watts and later wife Maureen. Other characters that were introduced during the decade include Maud Grimes, Fred Elliott, Gary and Judy Mallett, Fiona Middleton, Ashley Peacock, Maxine Heavey, Roy Cropper, Norris Cole and Tyrone Dobbs. And let’s not forget family from hell the Battersbys – Les, Janice, Leanne and Toyah, who caused mayhem when they moved into the street, upsetting the neighbours. But in time they injected some freshness into the cast and the show and they became well-liked and stayed for a number of years with Leanne still in the cast. Hayley Cropper became a significant character in 1998 when it was revealed she was a transsexual – a Corrie first and the show received much praise for her introduction and became a well-loved character.

During the 1990s, the show lost three of its veterans. Bet Gilroy left in 1995, after a 25 year association with the Rovers Return – first as barmaid and then landlady. While some were saddened about Bet’s departure, others felt that if the show could survive without Elsie and Hilda, it could also survive without Bet. And as many stars of the show have stated, the star of the show is the street itself. After Bet’s departure, the Rovers had many owners that included Jack and Vera, Alec Gilroy and Natalie Barnes. In 1997, Mavis Wilton left her post as Kabin assistant after 24 years for Cartmel, although Mavis first appeared in 1971. And in 1999, we lost good old Alf Roberts. It had been an end of an era in 1994 when Alf finally sold the Corner Shop. He’d been the owner since 1980 but his links with the shop harked back to the early 70s. It seemed that the increasingly ill health of Bryan Mosley (who played Alf) contributed to the decision for Alf to sell up as it meant that he didn’t have to appear as much in episodes. With Alf’s departure from the shop, it seemed the golden age of the Corner Shop had come to an end. Over the next few years, the shop, it seemed, didn’t have a part to play in stories like it did before in the days of Florrie Lindley, Maggie Clegg and Alf. By the end of the decade Alf’s appearances became sporadic and the decision was made, for the sake of Bryan, that Alf should be written out. Alf died of a stroke in the early hours of the New Year. Six weeks after Alf’s death, Bryan Mosley himself died.
As well as the exits of iconic characters, there were other more controversial exits, and you can read about them here.

As for storylines, there was yet again that balance of drama and humour. The humour included Reg Holdsworth and his waterbed, Derek Wilton and his gnomes, and Fred Elliott’s proposals to various women. As for dramatic stories there was the death of new-born Katie McDonald; Mike Baldwin’s marriage to Alma Sedgewick and his business dealings; Terry Duckworth selling his son Tommy; Rita Fairclough marrying a dying Ted Sullivan; Emily Bishop suffering a breakdown; the destruction of Don Brennan; Kevin Webster having an affair with Natalie Horrocks; and various other love triangles. The headline maker of the decade was when Deirdre Rachid was imprisoned for a crime she didn’t commit thanks to the evil deeds of boyfriend Jon Lindsay. While she gained the support of her friends and neighbours, she also gained support from an unlikely source – the Prime Minister Tony Blair. She became known as ‘The Weatherfield One’. After Bet’s departure, the Rovers had many owners that included Jack and Vera, Alec Gilroy and Natalie Barnes.

By the end of the decade, much emphasis was put on the younger members of the cast with characters like Nick Tilsley, Leanne Battersby, Steve McDonald, the Websters, Maxine Heavey, Ashley Peacock, Samantha Failsworth, Zoe Tattersall, the Malletts, Spider Nugent and Toyah Battersby leading storylines replacing the likes of the Wiltons, Don Brennan and Percy Sugden. Corrie had to think about its future audience as it entered the Millennium and reached its 40th anniversary.

Did you start watching Corrie in the 1990s?
What’s your favourite moment from the 1990s?