(This post was originally posted by Scott Willison on the Coronation Street Blog in August 2013.)

British tabloid journalism has had a very hard time of it in recent years.  There's been entire Parliamentary committees devoted to finding out if they're dodgy or not.  They've been called venal, cruel, vindictive, liars, and sometimes, just plain stupid.

It's pleasing to report that the Daily Star has bucked this trend with today's truly revelatory front page headline. 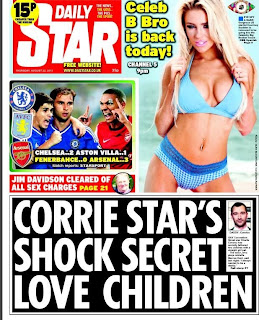 Thank you Daily Star.  It's absolutely new information that Charlie Condou (Marcus Dent) has two children.  I mean, one was born four years ago and one was born two years ago, but I understand you've probably been busy following the antics of "Big Bro": after all, no-one else in the UK is watching it.  You also probably missed his column about his family in the Guardian, which ran until 2012 and can be read in its entirety here, because, you know, it was in the Guardian, and you tend to avoid that paper.  They use some very big words.

You probably also missed tweets like this from Mr Condou himself:

but I know this "journalism" lark is difficult.  You have to use a keyboard and stuff.  You have hundreds of words to bash out, pages to fill, captions to write under pictures of girls in bikinis bending over and upskirt pics of barely out of their teens starlets.   Research takes time and you can't possibly use something like, I don't know, Google, where autocomplete offers up:

This kind of in-depth investigative work is just too difficult for you.  You can't let it get in the way of informing us, the Great British Public, the absolutely vital information that "ACTOR HAS FUNCTIONING TESTICLES".  Now THAT'S front page stuff.

Kudos to you, Daily Star.  Kudos.