What's happened to the women of Weatherfield?

(This post was originally posted by Clinkers (David) on the Coronation Street Blog in August 2013.)

Maybe it's the recent bout of hot weather or perhaps someone has poisoned the water (or gin) supply but it occurred to me that the ladies of the cobbles represent a pretty rum bunch at present.

There are exceptions of course. Hayley remains peerless and we are feasting on her every scene, storing them away for the time when there are no more. Deirdre is an absolute slice of joy. She has slid into wry, ironic 'daughter of Blanche' mode and should Ken never return from Canada, then it's good to know that Deirdre can exist in her own right. Three cheers too for the lovely Beth who finally seems to have shrugged off the 'Cilla-lite' mantle. Yes, she is rough and ready but she also cares. This is always an integral part to the success of a Corrie woman and probably explains why Tracy continues to be so unpopular.

Speaking of which... no, let's not bother. Far too many comments about McBarlow and St Ella so let's leave them alone. It's the other women who are, for me at any rate, a bit of a worry at the moment. 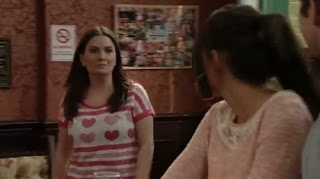 The Windass/Armstrong clan seem to be more than a little grim. It's good to see that Anna has lost her twee mumsiness and has reverted to being the unpleasant spitbag that first graced the cobbles.

Most of the time she sports the kind of face that could start a war. She presides over the gimlet-eyed Izzy, an unconvincing mother if ever there was one, Kay-teh, who went from sweet sixteen to perma-tanned harridan in the blink of an eye plus Rosemary's Baby, FayE. Together they represent an unedifying bunch. Anna in particular has had more personality changes than a series of Doctor Who regenerations. The woman is a nightmare and for laughs, probably gives herself the evil eye in the mirror. 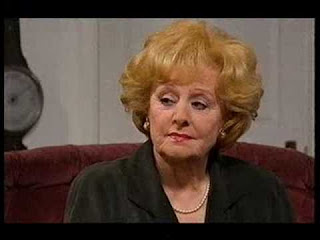 Tina and Reet. Where to begin? There is something worryingly unhealthy about the way Rita muscles in on the lives of young women. With all the subtlety of a steamroller in a red wig, in she goes, flashing her cheque book which automatically give her the right to an opinion. Rita knows best.

There's nothing better than a lesson in life skills from an octogenarian cabaret singer. Who better to receive these wise words than Tina, a study in misery and pent-up rage. A woman so angry that her fury can cook a hotpot before it even reaches the oven. A steady procession of Greater Manchester's finest psychiatrists would have their work cut out wrestling Tina's demons. 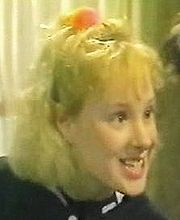 They say that apples never falls far from the tree which is a worry if that tree is called Sally. Sophie has dispensed with her Christian values and cosy chats with Emily for a cold and unconvincing relationship with Jenna, coupled with an unforgiving persona. Sophie has now been reinvented so many times that she's becoming a bit of a joke. Her current incarnation is a particularly unpleasant one and arguably, she's becoming as small-minded as her mother, the lovely Sally. The post-Kevin Sally is, we can but hope, returning to her roots as a bit of a slapper. Now in her late forties, Sally may be about to give up her delusions of grandeur and settle for life with a bit of rough. Tim seems to be from the same side of the tracks as her - the wrong side. Fingers crossed that he will bring out the inner scrubber in Sally and before long she'll be necking cans of lager on the Red Rec and investing in some nice hooped ear-rings.

Of the rest, I have to admit that Eva is always a joy to watch. Despite the war paint, this lady is fragile. Will she forge a new relationship with Munch's Scream (alias Leanne)? The Sister-In-Laws Connor provide varied viewing. Carla is good value at present whereas Michelle spends most of her days sulking and crossing her arms under her bosom. Maria seems to only exist fleetingly, like a half-remembered dream. Eileen trundles on and we have to 'bear with' until she gets rid of the fireman. She's a bit of a bore and of late, seems to fall into the Audrey and Rita trap of suddenly going a bit 'posh' for no apparent reason. Maybe it's a tribute to Annie Walker.

Audrey battles on, surviving whatever the writers throw at her. Gail however seems to be increasingly marginalised and this once strong, if serious, woman has morphed into some slightly ridiculous Mrs Mop with a  less than generous spirit. She is Ivy Tilsley for the new Millennium. Kylie excels in the hands of the talented Paula Lane and it will be interesting to see if the character signs up to mumsnet or cracks open a bottle of Freshco's own-brand vodka, post-baby.

It's good to see Julie back in harness and Fiz in the mix. Mary's extremes seem to have been re-channelled and I think Sinead could turn out to be good news.

Corrie tends to live or die by the strength of its women. The majority of the current crop are entertaining enough but some are starting to grate a little. Can they be saved or should they herded into the Corrie Cupboard for the rest of their days?