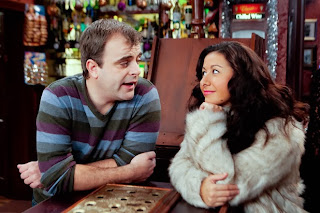 What's On TV has a few quotes from Hayley Tamaddon on her character, Andrea's hopes and desires. She thinks Andrea does fancy Steve even though she's currently dating Lloyd, surmising that perhaps she's only doing that to make Steve jealous.

There have been little looks, nothing really obvious but I've caught one or two wistful glances in Steve's direction and I've had the feeling that Steve is who she would prefer. Hayley says Andrea is "out to bag her Mr. Right".

There's definitely a connection between she and Steve and quite a lot of our blog readers have felt that Michelle has been treating Steve badly and seems to be dragging Steve down. She's also been openly hostile to Andrea but Hayley says “I think Andrea will be able to hold her own and personally I'm hoping for some real stand-offs between Andrea and Michelle." Me, too!

I'm one of those that thinks Steve and Michelle are horribly unsuited. The last time they broke up, Steve found Becky a lot more fun (and hard work in the end). I think Steve will find Andrea a lot more fun, too and Michelle might want to watch her Ps and Qs this time around.

Things are going to heat up when Lloyd and Andrea start dating and Steve finds he's jealous. It looks as if Andrea is playing it smart, keeping Steve at the friendship arms' length, not being too clingy or stalkery so far. I would rather her not get like that, in fact, and rather than do her best to break up Steve and Michelle, just wait for Steve to come to it himself, realizing that Michelle isn't The One but Andrea just might be. That's how I'd like to see it play out if indeed, that's where it's going. How about you?

I thought there was a 'guy code' on this. Steve can't date Andrea if Lloyd already has gone out with her. What will that do to their friendship??