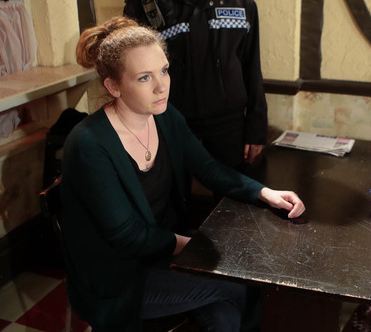 There has been something really unlikable about Fiz lately, not only does she shout at Roy's friends, she made a point of being nasty to Roy days after he'd lost Hayley.

It seems almost as if she saw herself as the most important person in Hayley's life, even before Hayley died, it seemed like she wanted to make Hayley's situation all about herself.

Poor Anna and Jenna who came into a flooded cafe, decided not to trouble the recently bereaved Roy, after all, as far as they knew he'd been with his mother for the past week, but in Fiz's mind, Roy had been gone far too long. Anna did her best to cope with the flood without calling Roy, but it simply was enough for the Stape family Mafia, who scowled at Anna's attempts to deal with the situation.

What do you make of Fiz's recent behaviour? Is she right to meddle in Roy's life as much as she has been doing? It's fair enough that she's concerned, but she never gave poor Roy any space to grieve in his own way.

For fiz, Hailey and Roy represent safety, security and love. She is acting as any immature child would if a catastrophic illness took away her mother. It is obvious that Fiz is immature, as are most of the under 40 crowd on CS(Gayle is the one over 50 example of extreme immaturity). Fiz hasn't had an easy life, she should have been in some kind of counseling program to help her acquire positive coping skills to keep her from going all "mafia" in stressful times. Any kind of education would only improve Fiz and Tyrone's lives ( and the lives of their kids).
Don't be too hard on Fiz if you haven't had to experience this huge loss and the attendant grief of losing someone she thought of as her mother.
Cheers !